For Wake Forest, ACC title game spot is on the line at BC 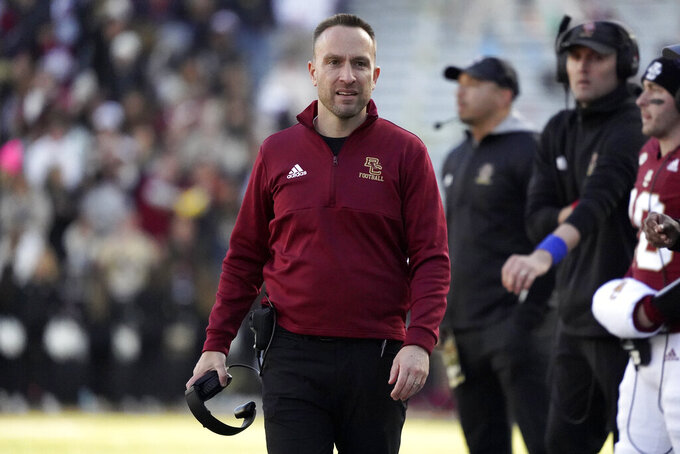 Boston College head coach Jeff Hafley looks on from the sideline during the second half of an NCAA college football game against Florida State, Saturday, Nov. 20, 2021, in Boston. (AP Photo/Mary Schwalm)

And no more safety net.

Win, and the Demon Deacons will play in the Atlantic Coast Conference title game against Pittsburgh. Lose to Boston College on Saturday, and their hopes of a first Atlantic Division title since 2006 are gone.

“The biggest thing is we just know what’s at stake this game: Win and you’re in. Win, or go home,” defensive lineman Miles Fox said this week as Wake Forest prepared for the regular-season finale in Chestnut Hill.

“I think that’s what’s motivating everybody this week,” Fox said. “Everyone knows how big of a game this is, and we have no choice but to be at our best.”

The Demon Deacons (9-2, 6-1 ACC) had a chance to clinch the division title last week, but lost 48-27 to Clemson. That left open the possibility that the two-loss Tigers could play in the conference championship game for the seventh year in a row.

But Wake Forest still had the clear path: beat the Eagles (6-5. 2-5), and it doesn’t matter what Clemson or North Carolina State do.

"Being in this position is very exciting,” defensive back Traveon Redd said. “Going into the last game of the season, knowing that you have a game that can decide whether you’re going to the ACC championship game, that’s something a lot of people pray for and want to have.

“I’m grateful for being in this position and I feel I like all that hard work going into the season is showing up.”

BC had lost four straight games before Phil Jurkovec returned on Nov. 5 from a wrist injury that was described as a potential season-ender. The Eagles won back-to-back ACC games to earn bowl eligibility before losing to Florida State last week.

BC has lost 24 straight games against ranked opponents since beating then-No. 9 Southern California in 2014. A victory on Saturday would spoil Wake Forest’s championship hopes, but coach Jeff Hafley said that’s not what motivates him.

“I’m not rooting for any one of those teams to make the championship game. All those coaches are good guys and they all have good teams,” he said. “I just want to win the game and continue to build and move forward. So that doesn’t get me any more excited. I wish I could tell you that it did.”

Here are some other things to look for in Saturday’s game:

Last week’s 26-23 loss to the Seminoles was BC’s first this season with Jurkovec at quarterback.

The Notre Dame transfer was injured in Week 2 against UMass and was thought to be lost for the season. He made a surprise start on Nov. 5 against Virginia Tech, leading the Eagles to a win and then following it with another against Georgia Tech.

Against the Seminoles, BC trailed 26-3 in the second half before scoring three straight touchdowns. Jurkovec was 10 for 24 for 148 yards and one touchdown, but on BC’s last drive, he was intercepted at the Florida State 25.

Wake Forest quarterback Sam Hartman has thrown for 3,475 yards to lead an offense that averages more than 43 points per game — fourth in the nation. He has thrown for more than 300 yards in six of the last seven games and at least one touchdown in 14 games in a row.