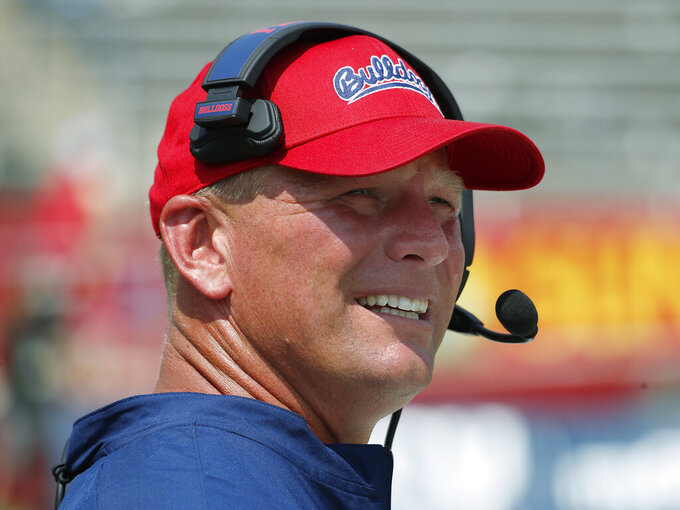 FILE - Fresno State coach Kalen DeBoer watches the team play Connecticut during the second half of an NCAA college football game in Fresno, Calif., Saturday, Aug. 28, 2021. Washington is in talks with Fresno State's Kalen DeBoer to be its next head coach, two people familiar with the discussions between the Bulldogs' coach and the Pac-12 school told AP on Monday, Nov. 29, 2021. (AP Photo/Gary Kazanjian, File)

Washington hired Fresno State’s Kalen DeBoer on Monday to lead the Huskies, handing a program that has struggled offensively to a coach with a track record of productive and creative offenses.

The 47-year-old DeBoer met with Washington officials in Fresno, California, early in the day and the deal was announced a few hours later.

DeBoer has spent the past two seasons at Fresno State, going 12-6. The Bulldogs went 9-3 this season, including a victory against UCLA. They lead the Mountain West in yards per play (6.34) and yards per game (463.6) and are second in scoring (33.6 points per game).

“My family and I are so grateful for the opportunity to lead such a storied program and be part of this prestigious institution,” DeBoer said in a statement. “The tough, hard-nosed tradition of Washington football speaks for itself, and it was obvious throughout this process that UW is committed to competing at the highest level."

His history with Tedford likely played in DeBoer’s favor with Washington. Tedford has a tight friendship with former Washington coach Chris Petersen, who has served as an adviser for athletic director Jen Cohen since he stepped down after the 2019 season.

Tedford also worked as a consultant for Washington during the 2016 season when the Huskies won the Pac-12 championship and reached the College Football Playoff.

“We set out to find the best fit for Husky football and we found an individual that exemplifies everything this program represents,” Cohen said in a statement. “Kalen is a winner and champion, plain and simple. He has succeeded at every stop because he does it the right way and is committed to a culture of excellence for Husky football student-athletes.”

Prior to his time at Fresno State, DeBoer worked at Eastern Michigan and Southern Illinois, and was the head coach at his alma mater Sioux Falls from 2005-09. He went 63-7 in five seasons as head coach, winning three NAIA championships.

Washington is replacing Jimmy Lake, who was fired on Nov. 14 after just 13 games coached. Lake was suspended for making physical contact with one of his players on the sideline on Nov. 6 in a loss to Oregon. A week later, Lake was dismissed, capping a downward spiral season that started with a loss to FCS powerhouse Montana in Week 1 and never improved.

Washington lost its final four games and finished with a losing record for the first time since 2009. The late-season slide was capped with a 40-13 loss to Washington State in the Apple Cup, the worst loss for the Huskies in the 113 games played between the rivals.

While DeBoer appears to be a solid choice and has the previous head coaching experience that was a requirement for the Huskies, he lacks some of the big name clout many Washington fans were hoping would come with the hire.

The hope for the Huskies is DeBoer works out as well as their last hire of a former Mountain West coach, when Petersen made the move from Boise State in 2013.

DeBoer will be inheriting a youthful team with only a small group of seniors but likely significant turnover between graduation, players entering the NFL draft and likely movement in the transfer portal.

Washington's recent success gives rise to expectations of a swift turnaround. Washington is one of only two Pac-12 schools to have reached the College Football Playoff and it made a bowl game every year between 2010-19. Washington played in three straight New Year’s Six bowl games between 2016-18.

“We could not be more excited to get to Seattle and get to work,” DeBoer said.