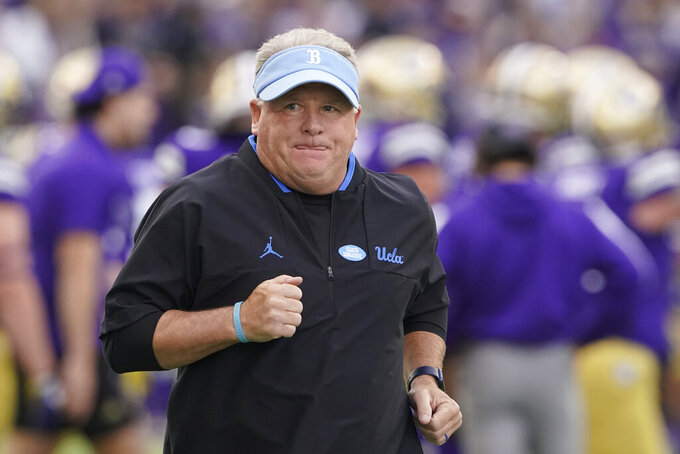 The last three weeks have featured a team ranked in the top three of the AP college football poll losing to an unranked team.

That streak will be tough to extend in Week 8.

No. 1 Georgia is off, No. 2 Cincinnati is a four-touchdown favorite at Navy and No. 3 Oklahoma is favored by more than five touchdowns against Kansas.

No. 4 Alabama and No. 5 Ohio State are also big favorites so maybe this is the weekend things calm down a bit after 47 ranked teams have lost through the first seven weeks of the season.

The Ducks have made a solid case as the Pac-12's best team. No other team in the conference is ranked.

The Bruins were in the rankings for a few weeks after beating LSU early in the season, but losses to Fresno State and Arizona State have tamped down the enthusiasm for Chip Kelly's team.

Still, the Bruins (5-2) are in the thick of the South Division race.

Lots of layers here with Kelly facing his old team for the third time, looking for his first victory. A loss for the Bruins raises questions about just how much progress Kelly has made at UCLA in year four.

A loss for Oregon (5-1) gives back most of the credibility the Ducks gained by winning at Ohio State and sets up the Pac-12 for yet another season without a playoff participant.

The fifth-year senior is putting up Dan Marino-type numbers with 21 touchdown passes in six games for the No. 23 Panthers (5-1), who face Clemson at home on Saturday.

At a time when the top players rarely get to senior year, having a Heisman contender who has been in college long enough to be nearing tenure is weird and also kind of refreshing.

Pickett will have a tough time keeping up with the quarterbacks from the CFP contending teams down the stretch of the season — unless he can turn Pitt into a contender.

Clemson (4-2) is having all sorts of problems scoring, but the Tigers' defense has been about as good as any outside Athens, Georgia.

If Pickett can deliver in this spot, it's time to start taking him seriously as a Heisman contender.

7 —- Average margin of victory for No. 8 Oklahoma State (6-0). The Cowboys' largest margin is 11 points and they have won four one-possession games. Oklahoma State goes to Iowa State for a game that could put the Cowboys in a commanding position for a spot in the Big 12 title game.

7-3 — No. 13 Notre Dame's record against Southern California in the last 10 meetings. The longtime rival did not play in last season's pandemic-altered schedule. It was the first season without a Notre Dame-USC game since they went three straight without a meeting from 1943-45.

14 — Points per game allowed by No. 25 Purdue (4-2), more than half as many as the Boilermakers have allowed per game over the last three seasons. Purdue plays its first game as a ranked team since 2007 at home against Wisconsin.

26 — Consecutive victories by No. 5 Ohio State against Indiana. The Hoosiers host the Buckeyes on Saturday night.

101 — Points scored in last season's game between Mississippi and LSU. The Tigers won 53-48 in Baton Rouge in the highest scoring game in the history of a series that dates back to 1894. This will be the first game for LSU since it was announced that coach Ed Orgeron is not returning next season.

The Seminoles hosting one of the worst teams in FBS is not something that is going to get much attention, but Florida State isn't what it used to be.

The Seminoles have won two straight games and beating the Minutemen would give FSU its first three-game streak since it won the final four games, including a bowl, of the 2017 season.

The Hokies started the season by upsetting North Carolina, but are now 3-3 and coming off a lopsided loss at home against Pittsburgh.

Syracuse comes to Blacksburg on Saturday with the Virginia Tech trying to avoid a third straight loss at Lane Stadium.