What a difference a week makes for Michigan State, Michigan 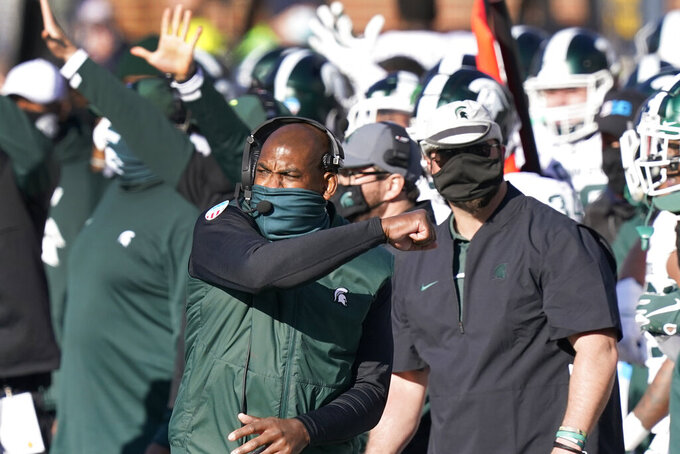 ANN ARBOR, Mich. (AP) — When Mel Tucker talked about how much a team can improve between games one and two, it felt like he was grasping at straws. What else could the Michigan State coach say after such a dismal start to the season?

Then the Spartans took the field against their biggest rival and delivered a shocker.

Tucker earned his first victory at the helm, and it was one the Spartans won't forget anytime soon, a 27-24 upset in Ann Arbor against Michigan. It was hard to imagine a bigger swing from one week to the next — for both teams. In its opener, Michigan State lost to a Rutgers team that had dropped 21 straight Big Ten games. And Michigan thumped Minnesota on the road that same day.

“It was just a focused week,” Michigan State linebacker Antjuan Simmons said. “I made sure that everybody knew that we were going to a big game, a big rivalry game, and we had to play for 60 minutes.”

Michigan, which had been favored by more than three touchdowns, dropped 10 spots to No. 23 in this week’s AP poll.

Even if the Spartans hadn’t flopped so badly in their opener, they would have probably been big underdogs in Ann Arbor. Michigan State lost to Michigan 44-10 last season, and only one coach for the Spartans had ever beaten the Wolverines on his first try — Nick Saban 25 years ago.

Tucker became the second. His team played the type of sharp, composed game that the Spartans didn't seem remotely capable of a week earlier.

Michigan State was so bad in its opener that its seven turnovers almost felt like an encouraging sign — that was unlikely to happen again, and perhaps the Spartans would look like a different team if they could hold onto the ball.

Neither team turned the ball over Saturday. The difference was the explosiveness of Michigan State's offense. Rocky Lombardi had more yards on 17 completions than Michigan's Joe Milton did on 32. The Spartans had five passes of at least 30 yards.

Lombardi threw for 323 yards and three touchdowns. Ricky White had eight catches for 196 yards and a TD. Michigan State did not allow a sack.

“We've got some skilled guys that can make plays,” Tucker said. “We felt good about our pass protection with our offensive line.”

Michigan looked unprepared for the talent the Spartans have at wide receiver. In addition to White's big game, Jalen Nailor added a 53-yard catch.

“We were making adjustments and they got by us a couple times on a double move as well,” Wolverines coach Jim Harbaugh said.

Now in his sixth season at Michigan, Harbaugh hasn't been able to lift the Wolverines to a Big Ten title or a win over Ohio State, but they've generally been a solid Top 25 team and won the games they're supposed to — especially at home.

That made this defeat all the more startling. Michigan looked impressive in its season-opening victory over Minnesota, but some of the luster came off that when the Golden Gophers lost to Maryland on Friday night.

Now the Wolverines are reeling. Milton put up solid numbers in defeat, but Michigan didn't run the ball as effectively as it had against Minnesota, and the defense gave up too many big plays.

In one week, the football crisis in the state moved from East Lansing to Ann Arbor.

“We've got to own the loss and come back and find out where we can improve,” Harbaugh said. “This is a high-character team and we'll do just that.”