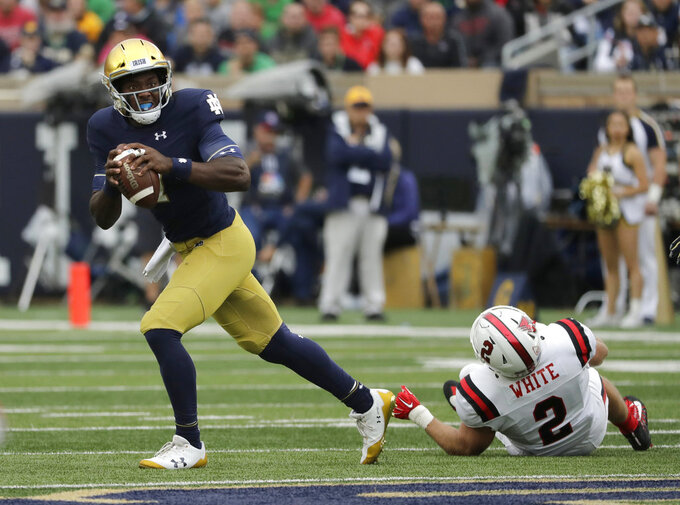 File- This Sept. 8, 2018, file photo shows Notre Dame quarterback Brandon Wimbush looking to pass against Ball State during the first half of an NCAA college football game in South Bend, Ind. Wimbush is practicing with Notre Dame to be the No. 2 quarterback for the third-ranked Fighting Irish in the Cotton Bowl amid questions about his future with the team after the College Football Playoff. There have been several media reports indicating that Wimbush has notified Notre Dame that he intends to transfer. (AP Photo/Nam Y. Huh, File)

DALLAS (AP) — Brandon Wimbush is practicing with Notre Dame to be the No. 2 quarterback in the Cotton Bowl amid questions about the former starter's future with the third-ranked Fighting Irish after the College Football Playoff.

Several media reports say Wimbush has notified Notre Dame that he intends to transfer. The senior already has a degree and could go to another school and play immediately as a graduate transfer.

"He's a competitor. The guy knows how to play football and he wants to make plays on the football field," center and team captain Sam Mustipher said. "For him to move on is in his best interest and I think the team has an understanding of that, and we're not angry at him for pursuing another opportunity."

Long said Wimbush hasn't told him if he plans to transfer after the season. "And I haven't really broached it with him," Long said.

Wimbush was Notre Dame's starter the first three games before getting replaced by junior Ian Book. Wimbush started 12 games last year, when he became only the third quarterback in school history with more than 1,000 yards passing (1,870) and 500 yards rushing (803) in the same season.

Long said Wimbush had a great practice after the team got to North Texas for its first CFP game.

"What his future holds, we wish him nothing but the best. He's been a great player for me, one that I hold near to my heart," Long said. "Whatever he decides to do he's going to be successful in whatever he wants to do."

Book took over as the starter in the fourth game after Wimbush went 42 of 76 passing for 589 yards with one touchdown and four interceptions, and ran 49 times for 136 yards and a score, in wins over Michigan, Ball State and Vanderbilt. He was 12-of-25 passing for 130 yards with three TDs and two interceptions in a start against Florida State last month.

"I think he's done a great job of handling himself, in only a fashion Brandon Wimbush could. News breaks that he's going to be moving on and people love him even more," Mustipher said. "He's given every ounce of what he has to this football program, and I don't think he's done doing it yet."