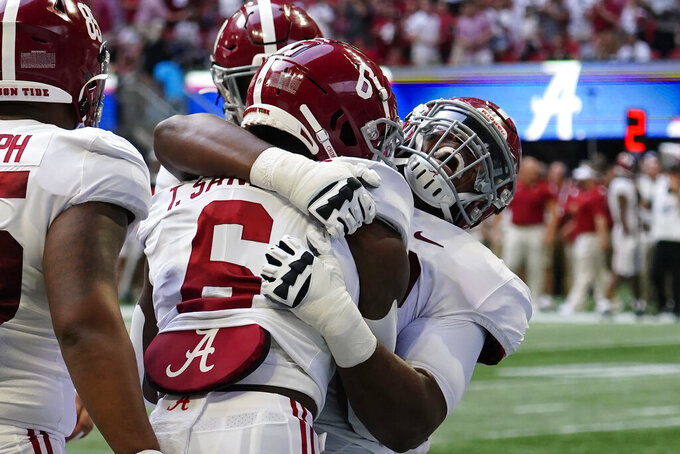 Alabama running back Trey Sanders (6) gets a hug from offensive lineman Evan Neal (73) after scoring a touchdown during the second half of an NCAA college football game against Miami, Saturday, Sept. 4, 2021, in Atlanta. (AP Photo/John Bazemore)

It should be a chance for Alabama to tune up for a visit to No. 13 Florida and get younger players and backups some more experience. That includes a few freshman receivers and freshman linebacker Dallas Turner, a Top 10 recruit nationally. Meanwhile, Mercer is seeking its first points against the Crimson Tide.

Alabama's defense, which looked dominant for much of the Miami game, against Mercer's unconventional offense that often lines up with three-back sets. Drew Sanders replaces outside linebacker Chris Allen, expected to miss the rest of the season with a foot injury.

Mercer: Freshman QB Carter Peevy faces a big challenge in both Alabama's defense and the Bryant-Denny Stadium crowd. He guided the Bears to four straight wins, including three over ranked FCS opponents, in the spring.

Alabama: RB Trey Sanders, a former five-star recruit who has had serious injuries each of his first two seasons, got his first touchdown against Miami. He's in a jampacked running back depth chart behind Brian Robinson Jr. and Jase McClellan, but could get more chances in this one. Sanders has 38 carries for 175 yards in limited action for Alabama.