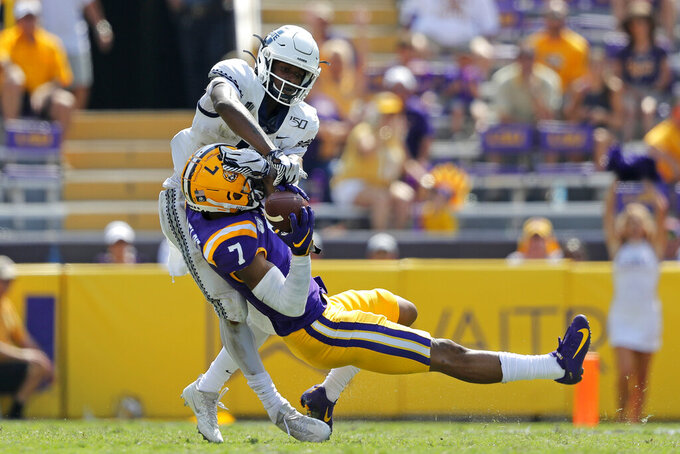 BATON ROUGE, La. (AP) — Grant Delpit's numbers are down this season compared to the big-play bonanza he produced during his 2018 All-America campaign — and that makes perfect sense to fellow LSU safety Jacoby Stevens.

"He's a unanimous All-American, so a lot of people aren't going to test him," Stevens said.

"Stats don't tell the whole game. He can shut down a whole side of the field," Stevens added, noting that opposing teams apparently weren't fooled by Delpit's jersey switch this year from No. 9 to No. 7. "You can see it on film sometimes. Quarterbacks kind of look and they see 7 and they just go the other way. He can't get a stat on that. He's a good ball player. He hasn't changed."

While a big year statistically would help Delpit's already considerable NFL draft credentials next spring, he can appreciate that having a big year individually can still be unsatisfying if team goals aren't met.

Delpit dominated as a sophomore last season, when he had five interceptions, five sacks, 9 ½ tackles for loss, 14 passes defended, a forced fumble and a fumble recovery, making him an easy pick for the AP All-America team presented this year by Regions Bank. The Tigers won 10 games in 2018, but missed out on the College Football Playoff.

This season, Delpit has one interception, one fumble recovery, no sacks, 1 ½ tackles for loss and four passes defended through seven games. But LSU is unbeaten, ranked second in the Top 25 poll and very much in the CFP conversation.

"I'm pretty tough on myself to make a lot of plays. But I kind of understand you can't make all the plays, all the tackles and all the interceptions," Delpit said. "Just as long as I'm doing my job, as long as we're playing great as a defense, it doesn't matter who makes the play or anything like that — just as long as we win."

While the 6-foot-3, 203-pound Delpit has proved last season that he can be as menacing rushing the passer as in coverage, the Tigers have largely had him protecting against the deep ball this season.

"If we put him back in the post all day, he'll say, 'Coach, I'll play in the post. Whatever it takes for the team," Orgeron said, alluding to Delpit's regular assignment covering the deep-middle part of the field against the pass.

Coaches remain interested in finding ways to "get Grant closer to the ball, blitzing, using him in a fashion where we're rushing the quarterback," Orgeron said. "But wherever we need him, he's going to play and he's basically effective wherever we put him."

Delpit knows all about adapting to change. His family was among those displaced from New Orleans by Hurricane Katrina in August 2005, less than a month before his seventh birthday. They settled in Houston, where Delpit started high school before finishing up at IMG Academy in Bradenton, Florida.

Delpit is about on pace to match last season's total of 74 solo and assisted tackles with 38 so far in 2019. It speaks in part to Delpit's ability to react quickly to plays even outside of his coverage area, but it also shows how LSU struggled with tackling and getting third-down stops during the first half of the season.

"We've given up a couple plays and missed a couple tackles that we shouldn't miss," Delpit conceded. "But the last few weeks, we've been playing pretty well as a defense as a whole, and we'll try to carry that into this SEC run that we have going on."

The Tigers host No. 9 Auburn on Saturday and visit No. 1 Alabama on Nov. 9, with a bye in between.

"We had big expectations before the season started," Delpit said. "We're getting into the toughest part of our schedule coming up. So we're just going to try to go 1-0 every week and take it from there."

With 75 yards this week against Clemson — no given — Dillon can break the school career record for yards rushing of 3,739 held by former Heisman Trophy finalist Andre Williams.

The Heisman runner-up will miss at least Saturday's game against Arkansas with a sprained ankle and then Crimson Tide fans will hope and probably pray for Tagovailoa to be healthy enough to play — and play effectively — against No. 2 LSU on Nov. 9.

Tagovailoa has been excellent this season (27 touchdowns, two interceptions, 11.2 yards per pass) and was near perfect against Tennessee before getting injured. With so many good quarterbacks, though, the competition to be All-American or the Heisman Trophy winner will be fierce.

(SEC Network analyst Cole Cubelic, a former guard for Auburn, breaks down an offensive lineman playing at an All-America level)

"His physicality has been on display all season as the Cajuns have the fourth-best rushing offense in the country," Cubelic said.

Weaver is tackling machine, leading the nation with an average of 15 per game. Moss is one of the hardest runners in the country and averaging 6.59 yards per carry.