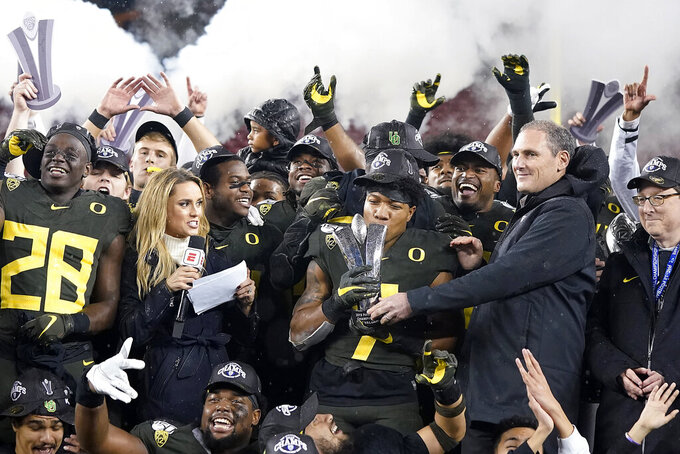 College football always needs an argument when it comes to the postseason. This year, it was whether LSU or Ohio State should be the top seed in the four-team playoff.

Four was enough this season to accommodate the teams worthy of a crack at the national championship. Maybe more than enough.

Unlike last season, when Ohio State was left out with a legitimate case to be in the College Football Playoff. That sparked a month of posturing and chatter — mostly from Big Ten country — about expansion beyond four teams. The university presidents who oversee the CFP ended up saying, essentially: “We're good with what we got — for now.''

Expansion still seems inevitable, even though it has become apparent over the first six seasons of the playoff that it is just not needed to crown a deserving champion.

‘’I think it's definitely something we should consider, not that it would be easy to play three more games," Ohio State coach Ryan Day said. "But I definitely think that we should consider taking the conference champs in the Power Five programs. I just think that's a cleaner way to do it. I know there's certain issues we would have to work through, not that now is the time to focus on those type of questions and thoughts."

The time is getting closer.

If the FBS commissioners who run the playoff — with the Power Five leaders having by far the most say — all decided they wanted to expand the field, it would take at least a year for them to figure how to do it. And it would have to be jammed into the current structure, from the bowls to the already set dates of the semifinals and championship games through the 2025 season.

Indications are the brainstorming for expansion has already begun, somewhat informally and with no great urgency.

“There's a lot that's right about the four-team playoff. I think one of the things we found, though, is that it's harder to be on the outside looking in than it was when it was just two teams," Big 12 Commissioner Bob Bowlsby said. ‘We're halfway through it and it's a good time to take a look at it. But I wouldn't jump to any conclusions on it. I just think we'll take a look at what's right about it. Take a look at the ways it might be improved and see where it gets to.”

Even the guy who should be leading the charge toward expansion, Pac-12 Commissioner Larry Scott, whose league has been left out four times in six seasons, doesn't appear to be in any hurry.

‘’We're coming off two years where we did not make the playoff,” Scott said Friday night before Oregon beat Utah in the Pac-12 championship game to ensure it would be three straight. ”Absolutely helped shape a perception that the conference was down. I think we've all seen this is a year where the conference has been stronger top to bottom, including elite teams in the hunt for the playoff at the business end of the season. Yeah, these are important milestones.''

In five years, there have been three champions: Alabama and Clemson twice and Ohio State once. Add in Oklahoma and those four teams have taken 17 of the 24 playoff bids over six seasons.

Four is enough to determine the best team in college football. There is certainly a desire among some fans for expansion, but the outcry is not nearly as loud as it was with the BCS.

Expanding the field will be mostly about growing the sport, which is a polite way of saying making more money. It's not just television revenue that would increase with more playoff games. A bigger field would make more teams contenders to simply get in. Just as expanded playoffs in professional sports are designed to keep more fans engaged throughout the season, so too would an eight-team field in college football.

Automatic bids for at least Power Five champions would take a lot of the subjectivity out of the process.

But for now, it's four — and this year that was enough to keep those clamoring for expansion quiet.

At least until next year.