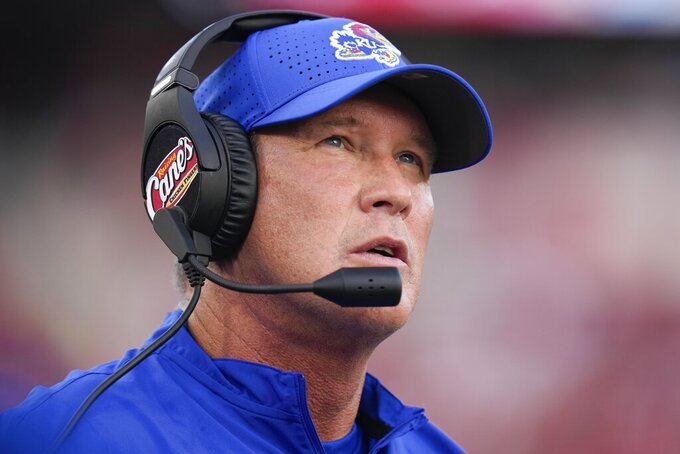 Adrian Martinez had done just about everything in his first four years of college football except play on a winning team.

Those wins are finally coming for him at Kansas State.

The 17th-ranked Wildcats (5-1, 3-0) sit atop the Big 12 standings in large part because of their dual-threat quarterback. He rushed for a combined 319 yards and acounted for nine touchdowns in breakout performances against Oklahoma and Texas Tech before he led the Wildcats to a grind-it-out victory at Iowa State last week.

Martinez has won three straight games for the first time after never winning more than two in a row at Nebraska. He was picked as the Big 12's top first-year transfer at midseason in a vote of Associated Press writers covering the conference.

Martinez set more than a dozen records in his time at Nebraska, but the Cornhuskers were just 15-29 while he often played hurt.

His 48 turnovers (30 interceptions, 18 fumbles) were most in the Bowl Subdivision from 2018-21, according to Sportradar. So far at K-State he has not thrown an interception or lost a fumble.

Martinez averages 241 yards of total offense per game to rank sixth in the Big 12, and he's fourth in rushing at 91 yards per game.

A key point of the early season was a 17-10 home loss to Tulane on Sept. 17. Martinez acknowledged he had played tentatively, and coach Chris Klieman and offensive coordinator Collin Klein sat him down and told him to forget about the possibility of making mistakes and let his natural ability take over.

“”That really speaks to the culture of this team and program, the leadership of coach Klieman and some of the older guys on this squad," Martinez said. “We were determined not to let it ruin our season. All our goals are still on the horizon. The Big 12, that's all it's about.”

QB Max Duggan, TCU (5-0, 2-0). He started 29 games for the Horned Frogs pre-Sonny Dykes and then lost the job to Chandler Morris in preseason practices. Morris sprained a knee in the opener against Colorado and hasn't been seen since. Duggan, meanwhile, has thrown for 261 yards per game with 14 touchdowns against one interception. He's second to Ohio State's C.J. Stroud in passer rating (194.36) and yards per attempt (10.3).

DE Felix Anudike-Uzomah, Kansas State. One of the most disruptive forces in the Big 12, he's building on a 2021 season that saw him earn all-conference first-team honors. He's tied for second nationally with 6.5 sacks. His two forced fumbles give him eight in 24 games, with his 0.33 career average best among active FBS players.

Kansas second-year coach Lance Leipold is known as a program builder, and his work with the No. 19 Jayhawks (5-1, 2-1) could be his best yet. The Jayhawks are ranked this season for the first time since 2009 and are one win from bowl eligibility for the first time since 2008. Leipold has done it with a big-play offense that has 19 plays of at least 30 yards and a defense fortified by a couple of key transfers.

Kansas was the easy choice, and last week's narrow home loss to TCU didn't do much to diminish the magnitude of what's happening in Lawrence. This is a program that hasn't won a conference championship in football since 1968, and it lost 91 of 97 Big 12 games under five coaches before Leipold took over last year. The Jayhawks still have a long list of accomplishments they would like to check off. The next opportunity comes Saturday when they go for their first win at Oklahoma since 1996.

Kansas QB Jalon Daniels was among the nation's most efficient passers until he injured a shoulder in the first half against TCU. He's doubtful for the game at OU. Daniels has thrown for 11 touchdowns and run for five, has been intercepted just once, and averages 234.5 yards of total offense per game. His six runs of at least 20 yards are second-most in the Big 12 and he's had eight passes go for at least 30.

Oklahoma (3-3) looked every bit the top-10 team it was when it won 49-14 at Nebraska. Now first-year coach Brent Venable's Sooners are 0-3 in Big 12 play for the first time since 1998 and coming off a 49-0 beatdown by Texas that was their most lopsided loss in the Red River Rivalry. The Sooners' offense has gone dormant in the absence of QB Dillon Gabriel, who's been out with a concussion since Oct. 1.

West Virginia coach Neal Brown is 2-3 in his fourth season and finding four more wins to get to .500 in the regular season won't be easy. One of the wins was against FCS Towson. Brown was one of the hot coaches after three straight double-digit-win seasons at Troy, but he's 19-21 at West Virginia. The Mountaineers are approaching four straight years without an appearance in the AP poll, which would be the program's longest stretch since 1959-68.

Gabriel was one of the Big 12's top transfers when he moved from Central Florida to Oklahoma and was sharp as he led the Sooners to a 3-0 start. He got outplayed by Martinez in the loss to K-State and has been out since the second quarter against TCU, when he took a devastating hit from Jamoi Hodge. The Sooners have scored one touchdown in 18 full possessions since Gabriel's been out.