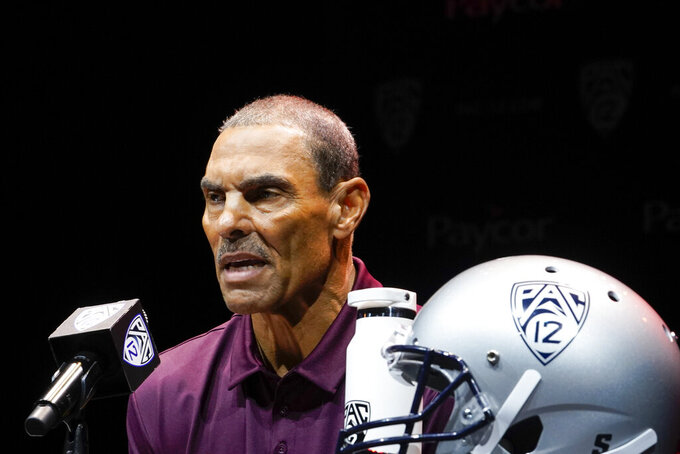 FILE - Arizona State coach Herm Edwards speaks during the Pac-12 Conference men's NCAA college football media day on July 29, 2022, in Los Angeles. Edwards was thought to be in the hot seat last season amid an NCAA investigation into recruiting practices, but athletic director Ray Anderson opted to bring him back for 2022. (AP Photo/Damian Dovarganes, File)

The heat could start up again this season if the Sun Devils don't come together quickly with a roster that includes 43 new players.

“Right now it seems to me from afar when I watch them, it’s a very tight-knit group of guys, in my opinion,” Edwards said. ”How will they play together, how will they collectively come together? You probably won’t know that until after the third week of competition. What kind of team do you have? After three weeks, you’ll figure out how they play together.”

After a disjointed, pandemic-altered 2020 season, Arizona State had high expectations last year. The Sun Devils managed to win eight games, but had some ugly midseason losses. They played under the shadow of an NCAA investigation into improper recruiting practices.

The investigation still lingering, Arizona State lost five assistant coaches, including both coordinators, and numerous players to the transfer portal. The Sun Devils also had 11 players who were drafted or signed with NFL teams as free agents.

Arizona State replaced them primarily through the transfer portal, which has led to some low expectations — at least from outside the program. Arizona State was picked to finish 10th in the Pac-12 preseason media poll.

“We obviously see the outside noise and I think the team’s really got a chip on our shoulders,” Arizona State linebacker Kyle Soelle said.

Two transfers are expected to have an immediate impact on the Sun Devils — quarterback Emory Jones and running back Xazavian Valladay.

Arizona State took a huge hit when Jayden Daniels, a three-year starter, opted to transfer to LSU. Jones should ease some of the impact.

A Florida transfer, the athletic quarterback is a threat with his arm and legs. Jones threw for over 2,700 yards and 19 touchdowns last season, adding 787 yards and five touchdowns rushing. He's already experienced playing in a major conference, but accuracy has been an issue with 13 interceptions last season.

Arizona State was 35th nationally in rushing offense last season. However, the team lost Rachaad White to the NFL and Chip Trayanum to Ohio State.

Valladay could keep the Sun Devils on track after running for 1,063 yards and six touchdowns for Wyoming last season.

Arizona State lost cornerbacks Chase Lucas and Jack Jones to the NFL, and both starting safeties are gone. That leaves new defensive coordinator Donnie Henderson with an inexperienced secondary.

The receivers room also will be inexperienced. Ricky Pearsall and LV Bunkley-Shelton, Arizona State's top two receivers last season, both opted to transfer. Andre Johnson is the leading returner after catching nine passes for 186 yards and a touchdown last season.

Arizona State's offensive line must be rebuilt with four of the six players who started last season and key backups gone. They've mostly been replaced with transfers.

One of Arizona State's biggest issues last year was penalties, many before the ball was even snapped.

The Sun Devils were 127 in the FBS with 8.77 penalties per game and 128th with 78.4 penalty yards. Cutting down on those has been a big point of emphasis for Edwards and his staff.

Arizona State opens the season at home Sept. 1 against Northern Arizona, which beat Arizona on the road last season. The Sun Devils also have nonconference games at Oklahoma State and at home against Eastern Michigan before kicking off the Pac-12 season at home against reigning Pac-12 champion Utah on Sept. 24.