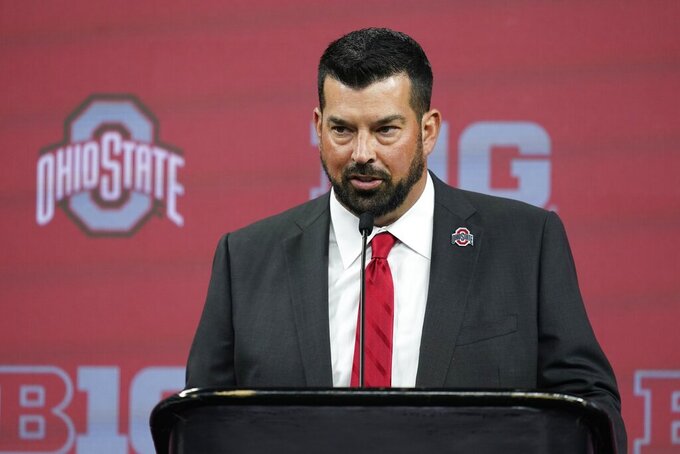 FILE - Ohio State head coach Ryan Day talks to reporters during an NCAA college football news conference at the Big Ten Conference media days, at Lucas Oil Stadium, Wednesday, July 27, 2022, in Indianapolis. Pay-for-play situations or improper inducements are still banned, but there is nothing stopping colleges from letting recruits know how athletes on campus are already profiting through NIL deals and how much support is available to them if they're interested. For instance, Ohio State has a Twitter account in which it boasted this summer that it had surpassed 1,000 disclosed NIL deals for its athletes. (AP Photo/Darron Cummings, File)

“You used to talk about graduation rates and majors,” Clawson said. “Now the first question is, ‘What are you guaranteeing me year one, two, three and four?’”

Clawson isn't necessarily talking about playing time, either. After more than a year, prospects are far more familiar with ways they can profit off their fame through endorsement deals and are looking hard at whether schools can help them do it.

When the NCAA instituted a policy last summer allowing athletes to earn money off use of their name, image and likeness, the notion was that it would give players a chance to make a little money but wouldn’t be used as a recruiting weapon.

That’s not how it’s worked out. Pay-for-play situations or improper inducements are still banned, but there is nothing stopping colleges from letting recruits know how athletes on campus are already profiting through NIL deals and how much support is available to them if they're interested.

For instance, Ohio State has a Twitter account in which it boasted this summer that it had surpassed 1,000 disclosed NIL deals for its athletes. The school was among the first to publicly disclose how much its athletes have earned, putting the number at nearly $3 million just six months into the NIL era.

“It’s basically becoming an arms race,” said Andy Stefanelli, the football coach at Our Lady of Good Counsel in Olney, Maryland, which has a handful of top recruits, according to composite rankings of recruiting sites compiled by 247Sports. “It’s going to be, I think, as much of a factor in recruiting as anything else – facilities, winning, coaching, all that. It’s going to be right up there with those factors for kids, at least for the high-level recruits.”

Willie Howard, the football coach and activities director at Cooper High in New Hope, Minnesota, is a former Stanford and Minnesota Vikings defensive end. His son, defensive end Jaxon Howard, is a top-100 prospect who has verbally committed to LSU.

The Howards say that every college they visited during Jaxon's recruitment used the same approach in addressing NIL issues. Each would discuss opportunities athletes had received while pointing out that nothing’s guaranteed and recommending that recruits don’t pick a school based on NIL possibilities.

“The message was always the same,” Willie Howard said. “It felt like it was cookie-cutter at times because it’s like, ‘We’re not going to be stuck with NCAA compliance coming after us and saying that we've done something we’re not supposed to do.’“

Jaxon Howard recently hired an agent, as the state of Minnesota allows high school athletes to explore NIL opportunities. But he added that NIL wasn’t a factor in his college choice.

“I don’t want to put my whole focus on something like name, image and likeness when my end goal is to make a multimillion-dollar deal one day in the NFL,” he said.

Still, On3 surveyed 85 notable 2023 recruits and found that 30% of them would be willing to attend a school that isn’t an ideal fit from a football or academic perspective if that’s where they could get the best NIL deal.

The emergence of collectives fueled by boosters has led to criticism that they indirectly lead recruits to a particular school, even though the NCAA handed down guidance earlier this year noting that boosters remain prohibited from recruiting or providing benefits to prospects.

Stefanelli says he hears the complaints from college coaches who visit his school.

“Frankly, some of them were saying, ‘Yeah, we’re losing recruits because X, Y or Z school is throwing a bunch of money at them,’" Stefanelli said.

The issue has crept into some of the public comments from coaches, which could be seen as indirect recruiting pitches. Alabama’s Nick Saban said last month that his players made more than $3 million in NIL deals over the last year and his SEC rival, Georgia's Kirby Smart, got even more specific.

Many coaches say they would like more oversight from the NCAA with different state laws in place across the country. Saban and Texas A&M coach Jimbo Fisher swapped barbs over the summer over the allegation that the Aggies had “bought” the nation's top-ranked recruting class.

“Change is inevitable,” Fisher said. “That’s the rules we have to play by, so we all have to adapt and adjust.”

There are ways in which schools can make their NIL cases directly to prospects – or players who have entered the transfer portal - without flat-out offering them incentives.

Many have hired staffers to work on maximizing NIL opportunities for athletes already on campus. Some have partnered with groups that can advise them on what they’re permitted to say to recruits on NIL-related matters.

“What we work with them on is what do you know, how do you sell your program, what is your program’s philosophy and how do you integrate NIL within that without making it solely just about a dollar amount that is sometimes actually being offered or what the media is reported is being offered,” said Celine Mangan, a senior account executive with Altius, whose client list of about 30 schools includes Georgia, LSU and Texas among others.

Schools need to have a good idea of what to say about NIL issues because prospects certainly are asking about them.

“Some kids will come in your office and it’s the first question they ask,” Boston College coach Jeff Hafley said.

They’re not just asking the coaches. Upperclassmen are fielding NIL-related questions from prospects.

“That’s probably one of the top questions is, you know, like the NIL deal thing,” TCU wide receiver Quentin Johnston said. “But the thing with recruits, they always come in and think, you know, that NIL is just a given.”

Johnston says he reminds recruits that NIL deals come only after players have done the work on the field, in the classroom and in the community.

As for those conversations Clawson has with Wake Forest recruits, he says he keeps any NIL-related discussions within both the letter and spirit of NCAA rules. But he adds that “clearly that’s not happening" everywhere.

“That is gone,” Clawson said. “I don’t see there’s any way that’s going to come back.”