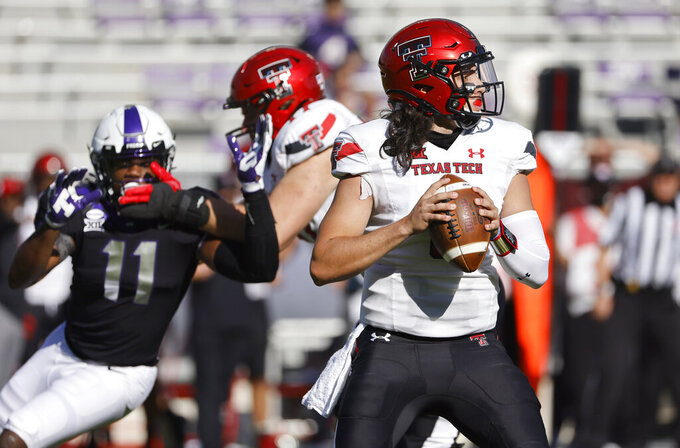 The last time Baylor played a game on the Texas Tech campus was 12 years ago.

It has been a lot longer since the Bears won there: three decades ago, when both teams were still in the old Southwest Conference.

Texas Tech (2-5, 1-5) is already guaranteed a losing record in Big 12 play for the 11th season in a row, after back-to-back losses. The Red Raiders have to win the rest of their games, plus a bowl game if they make one, to avoid their fifth consecutive losing record overall.

The Red Raiders haven't gotten the offensive spark coach Matt Wells had hoped for when he replaced oft-injured but now healthy Alan Bowman with Henry Colombi as the starting quarterback. The Utah State transfer began his college career as Jordan Love's backup when Wells and Tech offensive coordinator David Yost were still with the Aggies. Tech is 1-2 since Colombi became the starter.

When Wells made the switch, he said Colombi had “kind of jump-started” the offense in relief appearances, but added Bowman would have another chance at some point.

Baylor forced four turnovers last week at No. 17 Iowa State, including three interceptions in the first half. But the Bears lost 38-31 after senior quarterback Charlie Brewer was picked off in in the end zone in the final minute.

“We played a lot of man and we were able to get some of those grabs in man coverage, which is really a positive thing to see,” Aranda said of the defense. “It’s harder to do in man, so when that happens, it really speaks to that ball-hawking mentality you speak of. So, we want to really continue to build that style of defense. ... It adds energy to our sideline, adds energy to practice. Most importantly, it bleeds into our games.”

Baylor has lost its last nine games in Lubbock, including all seven played since the Big 12's first season in 1996. The Bears last won there in 1990. This series was played at a neutral site 10 seasons in a row — nine times at the home of the NFL’s Dallas Cowboys and another at Cotton Bowl Stadium — before Baylor won 33-30 in double overtime at home in Waco last season.

Baylor junior linebacker Terrel Bernard, the Big 12's top tackler, sustained a season-ending shoulder injury against Iowa State. He had 55 tackles and 3 1/2 sacks in Baylor's first five games. He will need surgery to repair a torn labrum. Junior linebacker Abram Smith is expected to get his first career start against Tech. “When he came in on Saturday, there were some positive things that he did,” Aranda said.

KICKED OUT OF JOB

Trey Wolff's struggles have cost him his job as Texas Tech's primary kicker for now. After making of 20 of 22 attempts as a freshman last season, Wolff is only 1 of 5 this year. He made a 40-yarder last week against TCU, but missed a 39-yarder with less than 3 minutes left that would have gotten the Red Raiders within one score. Jonathan Garibay, a junior who transferred from Riverside City College before this season, will handle kickoffs and field goals against Baylor.

Wells and Aranda were on opposites sides on the same coaching staff eight years ago. Aranda was the defensive coordinator at Utah State in 2012, when Wells was the offensive coordinator before becoming head coach of his alma mater. That was Aranda's only season with the Aggies, going from there to Wisconsin for three seasons as DC and then to LSU, where he was part of the 15-0 national championship last season before getting his first head coaching job.