BC looks to continue dominance of UConn as NE series resumes 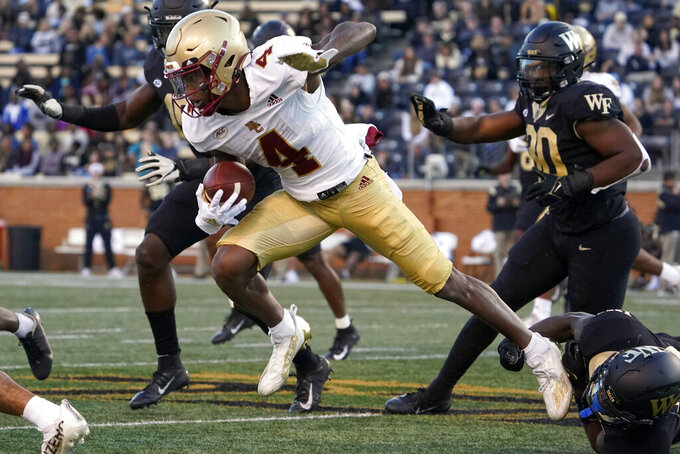 Boston College wide receiver Zay Flowers (4) breaks a Wake Forest tackle for a long gain after a catch during the second half of an NCAA college football game in Winston-Salem, N.C., Saturday, Oct. 22, 2022. (AP Photo/Chuck Burton)

Line: Boston College by 7 1/2, according to FanDuel Sportsbook.

This will mark the first matchup between the New England schools since 2017. BC has dominated the series, winning the last 11 games. The teams last met in Connecticut in 2003, a 24-14 Eagles victory. BC is looking to avoid what would be their second three-game losing streak of coach Jeff Hafley’s tenure.

Boston College: WR Zay Flowers. He is coming off his eighth career 100-yard receiving performance against Wake Forest, which included a 61-yard touchdown catch. It made him one of only three players in the country with four touchdown catches of 50 or more yards.

UConn: QB Zion Turner. The freshman is coming off one of his best efforts of the season, completing 18 of 22 passes for 129 yards with two touchdowns with one interception in the Huskies’ 25-21 loss at Ball State on Oct. 15.

BC is 174-81-12 all-time against New England opponents and 34-3 since 1978, the first year the NCAA subdivided into Division I-A and I-AA. ... BC has used nine starting offensive linemen and seven different starting combinations this season. … The Eagles entered last week having had incurred the fewest penalty yards in the ACC but dropped to second (48 ypg) after racking up 104 penalty yards on 11 flags against Wake Forest. … Huskies coach Jim Mora said there’s “a chance” Keelan Marion, who has been sidelined since breaking his collarbone in their season-opening loss to Utah State, could return this week. He was UConn’s leading receiver in 2021. … UConn RB Devontae Houston is dealing with an ankle sprain and hasn’t played since Oct. 8. … This is the first of two straight weeks UConn will face New England foes. The Huskies host UMass on Nov. 4.