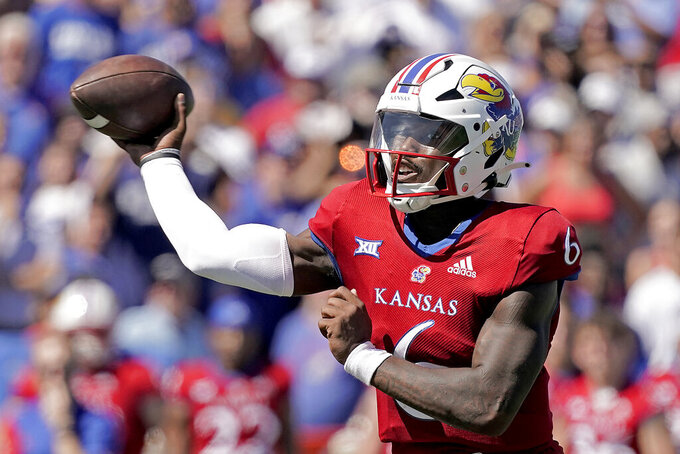 Some things to watch in Week 5 of the Big 12 season, the first full weekend of conference games:

No. 9 Oklahoma State at No. 16 Baylor. A rematch of last season's Big 12 title game that the Bears won 21-16 when safety Jairon McVea knocked running back Dezmon Jackson out of bounds just short of the end zone on a desperate, fourth-down dive in the final seconds. That was the last Big 12 game for both of those seniors.

Before being denied their first Big 12 title since 2011, the Cowboys had won the regular-season meeting over Baylor last October. Oklahoma State (3-0), the league's highest-scoring team at nearly 52 points a game, is coming off an open date into its conference opener. Baylor (3-1) began Big 12 play with a 31-24 win that snapped Iowa State's home conference winning streak of 11 that had been the longest in the league.

Kansas quarterback Jalon Daniels vs. Iowa State defense. Daniels is one of the nation’s most efficient passers — 66-of-93 (71%) for 890 yards, 11 touchdowns and one interception. He is also the leading rusher (320 yards, four TDs, 8.4 yards per carry) for the Jayhawks, who are 4-0 for the first time since 2009 and ranked just outside this week’s AP Top 25. He is third in the Big 12 with 302.5 total yards per game. The Jayhawks host Iowa State, the league’s best defense allowing 266 total yards and 14.5 points a game.

West Virginia plays at Texas, so one of those teams will fall to 0-2 in Big 12 play. The Longhorns last lost their first two conference games in 2016. The Mountaineers started conference play 0-3 last year. ... TCU leads the Big 12 averaging 8.1 yards per offensive snap. That is just behind national leader Ohio State (8.2) and ahead of Kansas (7.8), which is second in the Big 12 and third nationally. ... At 3-0, TCU is the only of the 12 FBS teams from Texas, which includes the Horned Frogs and three others from the Big 12, that is going into October undefeated. TCU hosts 18th-ranked Oklahoma.

Texas Tech plays at No. 25 Kansas State in a meeting of 3-1 teams that won their Big 12 openers — against the Red River rivals leaving for SEC no later than 2025. Already with a pair of overtime wins at home over Top 25 teams, including last week over Texas, the Red Raiders hit the road to face their fourth consecutive ranked opponent. The Wildcats moved into the rankings after they beat Oklahoma for the third time in four seasons, never trailing in a win on the road after getting upset the week before that by Tulane in their last home game.