Can No. 2 Ohio St keep foot on the gas in season's 2nd half? 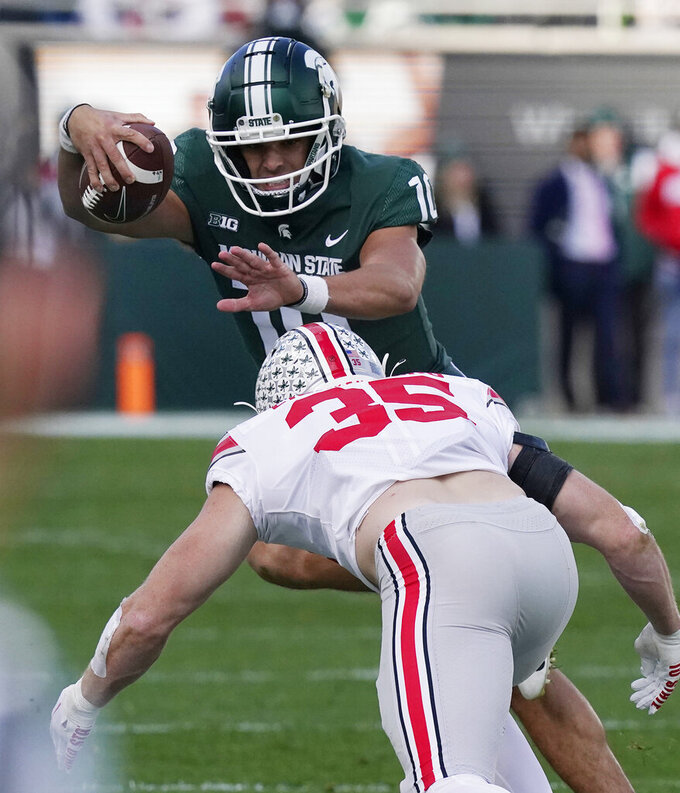 COLUMBUS, Ohio (AP) — Are the Ohio State Buckeyes on an inevitable march to another championship? Or is it too early — and the schedule too easy so far — to get a good read on the Buckeyes' full potential?

And can they avoid the out-of-nowhere traps during the second half of the season that have scuttled their hopes before?

With all of its offensive depth on display, No. 2 Ohio State finished the first half 6-0 (3-0 Big Ten) without breaking much of a sweat.

“We haven’t played our best game yet," linebacker Tommy Eichenberg said after Ohio State buried Michigan State 49-20 on Oct. 8, the last game before an off week.

Ohio State’s other second-half opponents, Iowa, Northwestern, Indiana and Maryland, will likely be double-digit underdogs. Of those, Maryland may present the most interesting challenge on Nov. 19 at College Park.

The Buckeyes have piled up some sensational offensive stats — 543.7 yards and 48.8 points per game — despite injuries to key stars. They happen to have a top-10 defense, too, thanks to new coordinator Jim Knowles.

“It’s scary to me, so I can only imagine what it is to the rest of the country," receiver Marvin Harrison Jr. said of Ohio State's potential.

Fox college football analyst Joel Klatt called the Buckeye's offense "the best ... in the country, and it's not quite close. And everyone is going to have to deal with them at some point this year."

In a much-hyped opener, the Buckeyes showed some rust but beat then-No. 5 Notre Dame 21-10, a win that lost its luster when the Fighting Irish lost at home to Marshall the next week and dropped out of the AP Top 25.

And all this without its full slate of offensive stars healthy. Receiver Jaxon Smith-Njigba has been out most of the season with a hamstring injury. Top running backs TreVeyon Henderson and Miyan Williams each have had to sit out games because of injuries. Most of the team’s top defensive backs have been banged up at one time or another.

Coach Ryan Day said most injured players should be ready when the Buckeyes host Iowa on Oct. 22.

“I feel like it’s rare in today’s day and age where you ... do have a full deck," Day said. "Typically, you have to play depth, and we know that. But it is exciting to know that if we can get everybody back in there at full strength, then certainly we can put a lot of stress on defenses.”

Quarterback C.J. Stroud, a Heisman Trophy favorite, said: “I don’t really think we have a limit. But I think we got to press this bye week and make sure we continue to get better.”

There is precedent in recent years for confounding losses down the stretch by Ohio State teams that may have been looking too far ahead.

In 2017, the No. 6 Buckeyes were pounded on the road by unranked Iowa 55-24, a setback that then-coach Urban Meyer still struggles to explain. The next season, they were ranked second and stumbled against unranked Purdue on the road, 49-20.

Last fall, Ohio State's mistakes and inability to stop the run led to Michigan's 42-27 home win, which snapped a streak of eight straight Buckeyes wins in the rivalry series. The loss ruined Ohio State's season, shutting it out of the conference championship game and the College Football Playoffs.

The Buckeyes have been thinking and talking about revenge ever since. Day's 2022 maxim of “competitive stamina” was borne out of the Michigan loss.

If Ohio State and “That Team Up North” can run the table ahead of this year's edition of “The Game,” expect an extra heaping helping of hype during Thanksgiving week. It's already percolating in Columbus and Ann Arbor.