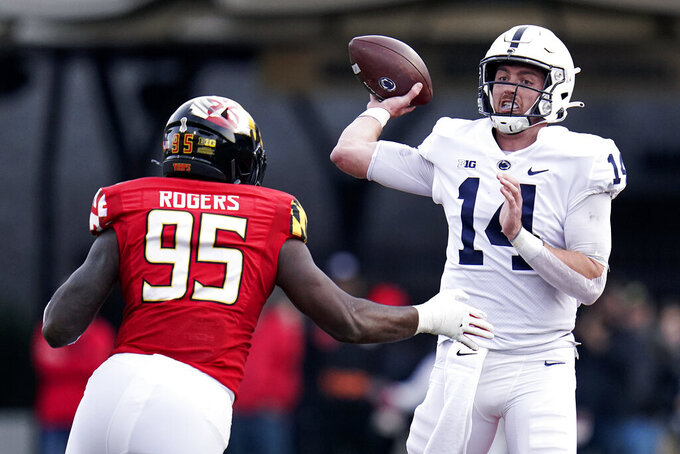 COLLEGE PARK, Md. (AP) — Jahan Dotson put on quite a show for the family members who came to see him play.

Afterward, he was a little overwhelmed just talking about it.

“I probably had about 20 people here today. That's what makes me go so much harder, just my family,” Dotson said, tears eventually welling up in his eyes. “They support me literally through everything. I'm kind of getting emotional here, but yeah, they're like my rock.”

Dotson caught 11 passes for a school-record 242 yards and three touchdowns, helping No. 22 Penn State snap a three-game losing streak with a 31-14 victory over Maryland on Saturday night. Dotson said his mother, father and grandfather were there to watch, along with aunts and uncles who had come in from around the country.

Sean Clifford threw for 363 yards for the Nittany Lions, including an 86-yard TD strike to Dotson that gave Penn State the lead with 13:55 to play. Dotson also caught scoring passes of 38 and 21 yards.

“Each week our plan is to get Jahan Dotson as many touches as possible,” Penn Sate coach James Franklin said. ”That's what you have to do with your best players, and he came through for us time and time again tonight."

The Terrapins tied it at 14 early in the fourth quarter. A sack knocked Penn State (6-3, 3-3 Big Ten) back 8 yards on the first play of the next drive, but then Clifford found his star receiver over the middle and Dotson outran everyone to the end zone.

That was the longest reception of Dotson's Penn State career. The Nittany Lions struggled to put away the Terrapins, but they were able to take advantage of three empty Maryland trips to the red zone.

The Terrapins (5-4, 2-4) were trying to secure bowl eligibility for the first time since 2016. Taulia Tagovailoa passed for 342 yards and a TD, but he took an intentional grounding penalty that knocked Maryland out of field goal range early and fumbled a shotgun snap for a key turnover in the third quarter.

“The thing I like most about this is our team continues to give us the effort and the fight is there,” Terps coach Michael Locksley said. “I surely would like to see us play smarter and not beat ourselves.”

Clifford found a very open Dotson deep for the game's initial touchdown in the first. Maryland reached the end zone toward the end of the half on a 2-yard run by Challen Faamatau, but a missed extra point left the Terrapins down 7-6 at the break.

Dotson's second touchdown capped a 95-yard scoring drive that made it 14-6. Maryland tied it when Tagovailoa threw a 13-yard touchdown pass to Corey Dyches on the first play of the final quarter, then passed to Chigoziem Okonkwo for the 2-point conversion.

After Penn State went ahead 21-14, Dotson provided one more big play — a 45-yard catch-and-run on third-and-8 that set up a field goal.

Penn State: It was an uneven game for the Nittany Lions, who had a long drive early in the second half and hit on several big plays — but also had their share of failed possessions against a Maryland team that hasn't looked great defensively.

“I'm proud of our guys," Franklin said. “First half wasn't as pretty as we wanted it to be, but then you guys would have nothing to talk about. Second half we came out and I thought played a lot better.”

Maryland: The Terps were more competitive than they were earlier this season against a couple other ranked teams. They lost to Iowa and Ohio State by a combined 117-31, but they were a threat to pull an upset for most of this one.

Penn State lost to Maryland last season, only the third victory for the Terrapins in 44 games of this series. The Nittany Lions bounced back in meeting No. 45.

Maryland spent a lot of time in Penn State territory and didn't have much to show for it. The Terps reached the 18 on their first drive before an 18-yard loss on the intentional grounding call forced a punt.

In the third quarter, Maryland had a drive stall at the Penn State 36, then later made it to the 10 before a snap went off Tagovailoa's hands, bounced off running back Tayon Fleet-Davis, and the Nittany Lions recovered.

Brown's interception return came on a play that originated at the Penn State 20.

“I like how our kids competed for four quarters, but we just continue to make mistakes at the most inopportune times,” Locksley said. “We had five opportunities in the red zone and came away with two touchdowns.”

The final score will look more convincing than this game was, but the Nittany Lions have ended their skid.

Maryland: At No. 5 Michigan State next Saturday.