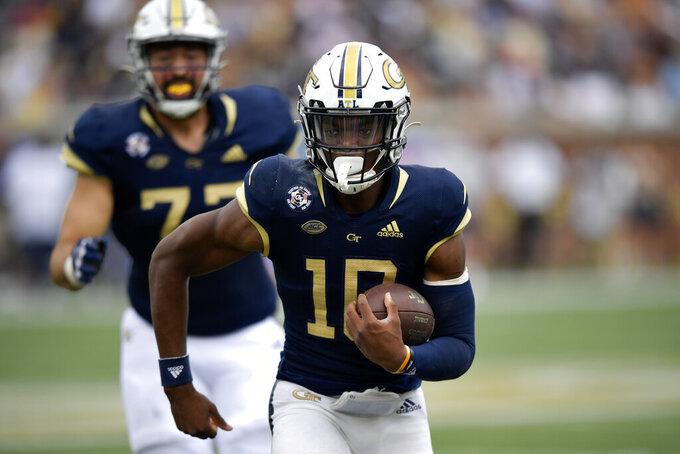 Georgia Tech quarterback Jeff Sims (10) runs out of the pocket against Pittsburgh during the first half of an NCAA college football game, Saturday, Oct. 2, 2021, in Atlanta. (AP Photo/Mike Stewart)

DURHAM, N.C. (AP) — Duke and Georgia Tech both had momentum after wins by double-digit margins before opening October with a big stumble. The Blue Devils and Yellow Jackets meet Saturday for the chance to regroup, and maybe find some consistency.

Duke (3-2, 0-1 Atlantic Coast Conference) is coming off a 38-7 loss to rival North Carolina, which had followed back-to-back nonconference wins against Northwestern and Kansas. The Blue Devils rank among the national leaders in total offense and scoring, but finished with a season-low 314 yards.

“It comes down to we didn’t do anything consistently that wins games,” Duke coach David Cutcliffe said.

That showed in Duke springing Jalen Calhoun for an 80-yard touchdown catch to open the second half but otherwise averaging 3.8 yards per play. Or in the defense making the Tar Heels work on drives only to surrender a big play; UNC got more than half of its 456 yards (257) on six plays, including 75- and 63-yard touchdowns.

The Yellow Jackets (2-3, 1-2) had followed a tough loss to six-time reigning ACC champion Clemson by blowing out the Tar Heels at home in a big win for third-year coach Geoff Collins’ rebuilding effort. But Georgia Tech followed that by falling behind 42-14 before halftime in a 52-21 home loss to Pittsburgh.

“The performance our team put together against North Carolina … we just didn’t show that on Saturday,” Collins said. “They had a good week of prep but just some adversity set in very early in the game, and uncharacteristically, we didn’t respond to that challenge.”

Some other things to know about Saturday’s Georgia Tech-Duke game:

Getting Jeff Sims back at quarterback can only help Georgia Tech in building some rhythm.

The second-year freshman started the season-opening loss against Northern Illinois before exiting with an injury, but he returned to run for three touchdowns and throw for a fourth in the UNC win. Sims threw for a career-best 359 yards with two touchdowns in the Pitt loss.

For a team transitioning from the spread-option offense run by former coach Paul Johnson, Georgia Tech's big passing games have the potential to cause deep dives into the school records.

A good example came in last week’s loss to Pitt, when Sims passed for 359 yards and two touchdowns after throwing interceptions on his first two attempts. Sims’ 24 completions and passing total set career highs. The 359 yards rank eighth in school history and were the most since George Godsey threw for a school-record 486 yards against Virginia on Nov. 10, 2001.

Duke’s Mataeo Durant continues to rank as one of the nation’s top runners.

The senior ranks fifth in the Bowl Subdivision ranks by averaging 127.2 yards per game, slightly behind Syracuse’s Sean Tucker (127.6) for the league lead. Durant is also tied for fourth in FBS with nine total touchdowns.

Durant opened the year with a program-record 255 yards rushing in a loss to Charlotte and has fallen short of the 100-yard mark just once.

Duke has done a better job of late putting pressure on opposing quarterbacks.

The Blue Devils managed just one sack through the first two games, but had three against Northwestern on Sept. 18. Then, after tallying just one against Kansas, the Blue Devils took down UNC star quarterback Sam Howell five times in the loss.

Following a wet week of practice in Atlanta, Georgia Tech is preparing for more rain on Saturday at Duke.

To prepare for the conditions, the Yellow Jackets did not use their indoor facility on Monday and instead practiced at Bobby Dodd Stadium. On Tuesday, the team split the practice, working both inside and again in the rain.

The forecast calls for a roughly 60% chance of rain with occasional showers through the day.