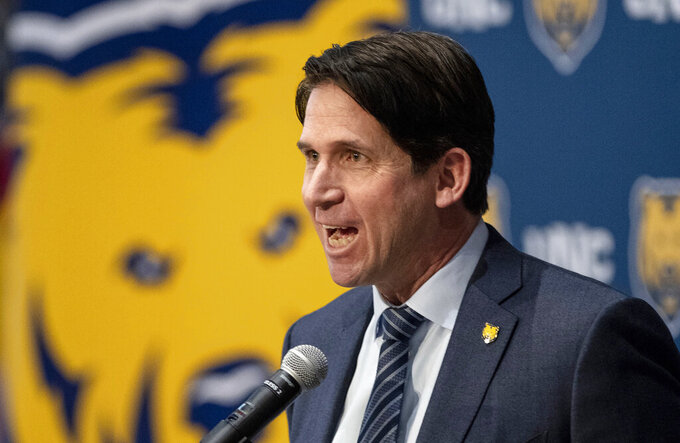 FILE - In this Dec. 13, 2019, file photo, former NFL wide receiver Ed McCaffrey speaks during a news conference after being introduced as the new University of Northern Colorado head football coach in Greeley, Colo. McCaffrey will lead the Bears on to the gridiron to face Colorado in Boulder, Colo., for the two teams' season-opening tilt on Friday, Sept. 3. (Alex McIntyre/The Greeley Tribune via AP, File)

At least, that's the way it was when both were with the Denver Broncos — Dorrell in charge of the wideouts and Ed McCaffrey as one of his receivers.

They'll be on opposite sidelines Friday night when Dorrell and the Buffaloes host Northern Colorado at Folsom Field. It will be the long-awaited college coaching debut for McCaffrey, who was hired on Dec. 12, 2019, only to have his team sit out last season due to the coronavirus pandemic.

Dorrell doesn't have much film to study on a McCaffrey-coached team. To brush up on his adversary, he's watched footage from McCaffrey's previous coaching stop at Valor Christian High School in Highlands Ranch, Colorado.

It could've been more, but McCaffrey suffered a season-ending fractured leg on Sept. 10, 2001, against the New York Giants.

Given the Buffs don't know all that much about the Bears, they're going to treat it like the San Diego State contest last season. Colorado had a contest at USC canceled, leading to the Buffs picking up the Aztecs later in the week and leaving virtually no time to game plan. Colorado pulled out a sluggish 20-10 win.

“We’re going to have to adjust as we go,” Dorrell said. “We just don’t know what’s their style of play."

The McCaffrey family will be well represented: Max, the older son of McCaffrey, is the offensive coordinator and Dylan, a transfer from Michigan, the quarterback.

“Our guys are really excited for the opportunity to play on television, playing in a packed stadium,” Ed McCaffrey said. "I mean, how fun is that?”

For the second straight season, none of the Colorado QBs on the roster have a start. Starter Brendon Lewis did play one game last season, when he filled in for Sam Noyer (now with Oregon State) in the Alamo Bowl. Lewis was in a QB competition in camp with transfer J.T. Shrout, who recently had knee surgery.

“He’s going to have a big-time year,” Dorrell said of Lewis. “But he’s going to do a few freshman things here and there. ... It’s really trying to manage him and understanding his role. You know, you’re not Superman. Just do your role.”

Although the Bears and Buffaloes are only separated by about 50 miles, this marks just the 13th time they’ve met on the football field and second time since 1934. Colorado leads the series 10-2.

Meet the newest Colorado buffalo — Ralphie VI. Born May 27, 2020, on a ranch in western Nebraska, she currently weighs just under 500 pounds and will make her Folsom Field debut Friday. She takes the place of Ralphie V, who retired following the 2019 season after 12 years.

The Bears have 17 transfers from the FBS level. In addition, there are about 65 players who weren’t on the roster at the end of ’19.

“We do have the talent to win," said McCaffrey, whose team was picked to finish last by the coaches in the Big Sky Conference preseason poll. "I’m so proud of the effort and the attitude of our young men, but we haven’t played a game yet. We've got a lot of work to do.”

Colorado has won five straight season openers. During that streak, the team has averaged 41.2 points. ... The Buffaloes are 18-25 on Fridays. ... Leading the Colorado defense will be linebacker Nate Landman, who tore his Achilles against Utah last December. ... Northern Colorado is 2-16 against Pac-12 opponents.