Ehlinger and offense will have to carry No. 15 Texas 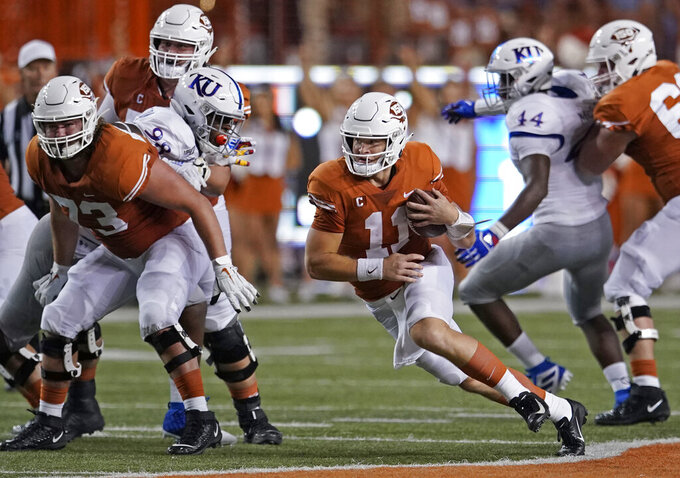 Texas' Sam Ehlinger (11) runs for a long gain against Kansas during the first half of an NCAA college football game in Austin, Texas, Saturday, Oct. 19, 2019. (AP Photo/Chuck Burton)

AUSTIN, Texas (AP) — After escaping what would have been a crushing home loss to Kansas, Texas and coach Tom Herman face a stark reality: The Longhorns will go only as far as quarterback Sam Ehlinger's broad shoulders can carry them.

The Jayhawks were the latest team to shred an inexperienced and injured Texas defense. Kansas scored 24 points in the fourth quarter before Ehlinger bailed Texas out with a late drive for Cameron Dicker's field goal on the final play to pull out a 50-48 victory .

While Ehlinger continues on pace to smash Texas passing records this season, the defense could rank among the worst in school history. And when an offense has to top 48 points in order to beat Kansas, which changed offensive coordinators midseason and is winless in the Big 12, the rest of the Texas schedule looks like a weekly tossup as the Longhorns fight to get a rematch with No. 5 Oklahoma in the Big 12 title game.

"None of us is satisfied that defensive performance," Herman said Monday. "Everybody associated with that side of the ball (defense), players, coaches, leaders, we all get it ... We're committed to figuring it out. We can, and we will."

Texas can't cover, stop the run or get to the quarterback.

Texas ranks last in pass defense and almost last in total defense in the Big 12 . It was easy to excuse the dubious marks when it was No. 2 LSU and Oklahoma putting up big yards. But last week it was Kansas quarterback Carter Stanley throwing four touchdown passes and running back Pooka Williams rolling up 190 yards rushing.

The Longhorns have allowed three 100-yard rushers the last two weeks and can't pressure the quarterback without a blitz. The defensive line has only two sacks this season.

In the secondary, injuries to starters have made a huge impact. Last season's all-Big 12 safety, Caden Sterns, hasn't played in five games and other key starters have missed time or played hurt.

Herman brushed off injury concerns early in the season when he noted defensive back was one of the deepest positions on the roster. Gaping holes in the secondary against Oklahoma and Kansas finally raised alarms with a trip to TCU coming up Saturday.

Herman has not publicly criticized the game plans and plays called by defensive coordinator Todd Orlando, who is paid more than $1.7 million per year.

"Guys that have been here 2-3 years should be able to play man-to-man coverage ... Coaches need to uphold our end of the bargain in terms of the techniques and the players need to uphold their end by employing those techniques on game day," Herman said.

"I'm never going to say its personnel. We're going to have really good players at the University of Texas," Herman said.

Texas still has Ehlinger leading an offense averaging 41 points per game. While Kansas was moving the ball up and down the field, so were the Longhorns, who had a 300-yard passer, a 100-yard rusher and a 100-yard receiver.

Texas outgained Kansas 638-569 with most of the 69-yard difference coming on the final drive to the winning field goal.

Ehlinger has thrown four touchdowns four times this season and his 2,057 yards passing has him chasing Colt McCoy's single-season school record of 3,859 set in 2008.

But Ehlinger also threw a fourth-quarter interception that Kansas turned into a touchdown. He made up for it with six completions on Texas' final drive — he also ran for a first down — for Dicker's game winner.

The chain of events was a perfect example of how Ehlinger goes, so goes Texas.

"At the end of the year, this one (win) is going to count just the same as all the other ones doe," Herman said. They don't count them any different. But we expect to play much, much better, especially defensively."