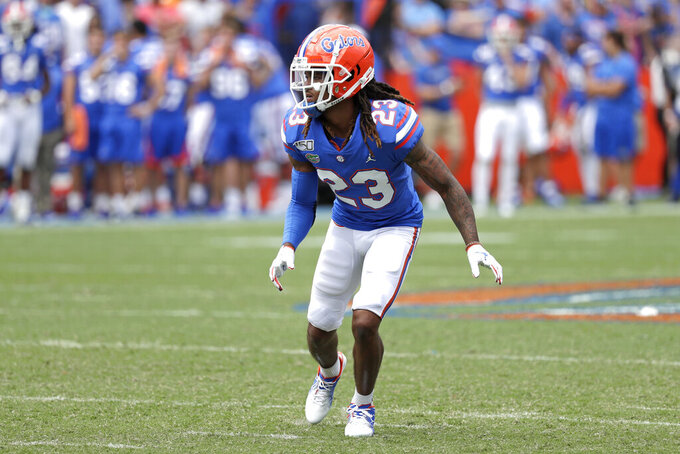 A junior from Huntsville, Alabama, Hill started five games last season and had been slotted to play opposite Kaiir Elam, who tied for the Southeastern Conference lead with 13 pass defenses in 2020.

Instead, the Gators are left to find Hill's replacement a week into training camp.

“Just kind of a shame that stuff happens out there on the field,” Mullen said.

Hill was looking forward to becoming a full-time starter in his third season and helping Florida regain its reputation as being on the nation's top secondary units. The Gators ranked 100th out of 127 teams nationally in pass defense last season.

Mullen will turn to a number of unproven candidates to fill the suddenly vacant spot.

Missouri transfer Jadarrius Perkins and redshirt freshmen Avery Helm and Ethan Pouncey will be in the mix along with five-star recruit Jason Marshall from Miami. Texas A&M transfer Elijah Blades also could get a shot. Blades announced last week he plans to transfer to Gainesville and will join the team Friday. Blades recorded 19 tackles and three pass breakups in 2019, the last season he played.

Hill has been through this kind of rehab before. He tore the ACL in his right knee during his senior year at Bob Jones High School in Huntsville. Hill landed in Gainesville and started showing signs last season that he could be a dependable starter, finishing with 14 tackles and seven pass breakups.

“You're looking at a young guy that’s been through this once and came out on the positive end on the other side,” Mullen said. “I think he understands how to come through it, what he needs to do and how he can get through it and how it’ll improve. ...

"He's worked his tail off to earn everything he’s gotten here. I think that makes it easier because you understand how to get back there: I know that path. I know what I need to do, and I plan on being back full speed here shortly.”