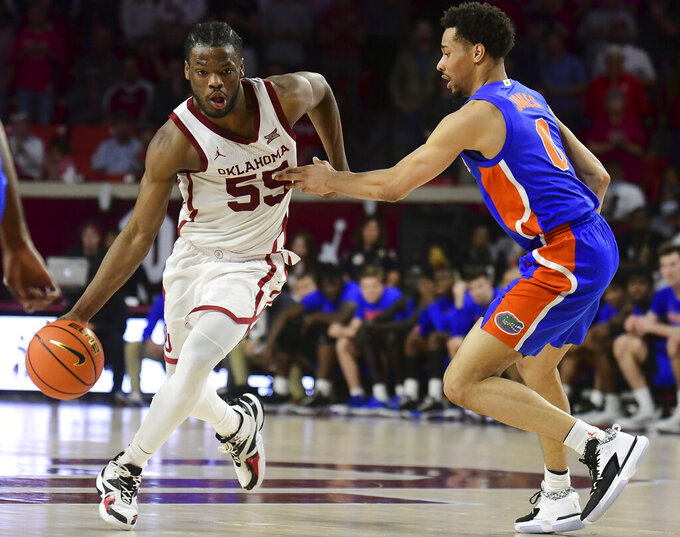 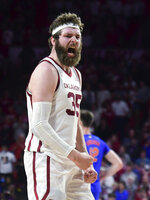 NORMAN, Okla. (AP) — As Oklahoma football fans tried to recover from Lincoln Riley’s sudden decision to leave for USC earlier in the week, the basketball team stepped in and gave them something to cheer about.

Tanner Groves scored 20 points to lead Oklahoma to a 74-67 victory over No. 14 Florida on Wednesday night.

Jalen Hill scored a career-high 18 points and Umoja Gibson added 15 for Oklahoma (7-1), which earned its biggest win yet under new coach Porter Moser. He picked up his 300th career coaching win after previous stops at Arkansas-Little Rock, Illinois State and Loyola Chicago.

It was much larger than a typical crowd for a non-conference game, and it was energetic and engaged from the beginning — something that Moser has pushed for since he arrived. He was pleased to see his vision become real.

“I think it was just for us, for our guys, for the fans, for the basketball fans here, for the Sooners," Moser said. "To get the people in this arena — come on in. This thing could be electric.”

Phlandrous Fleming Jr. scored 17 points and Colin Castleton added 14 points, 11 rebounds and four blocks for Florida (6-1), which shot 42% and made just 4 of 24 3-pointers. The Gators finished with seven assists and 16 turnovers.

“I think that OU was just better than us," Florida coach Mike White said. "And I think they executed better. They were a little bit more sound defensively. They swarm to the ball. We had we had some careless turnovers. The crowd definitely was a factor, of course. Credit the environment here, but I’d like to give more credit to their staff and players. I thought they were good.”

The Sooners led 9-0 before the Gators scored on a free throw nearly four minutes into the game. The Gators committed five turnovers before making a shot.

“You know, the first five minutes, I thought our guys believed,” Moser said. “They were ready defensively. It set the tone. What great teams do is they punch back, which Florida did. But it seemed like every time, we bounced back. And the crowd helped us bounce back. I think they got behind every good play. They did not relax.”

Florida chipped away throughout the half and took the lead for the first time on three free throws by Tyree Appleby just over a minute before the break. Oklahoma recovered and led 37-36 at halftime.

A 3-pointer by Groves pushed the lead to seven with just under 6 minutes remaining, and Hill followed with a thunderous right-handed jam that gave the Sooners a 65-56 lead and prompted a Florida timeout.

Florida rallied, and a 3-pointer by Appleby cut Oklahoma's lead to 69-67 with about 2 minutes remaining. But Hill scored, was fouled and made the free throw to push the Sooners' lead back to five, and Oklahoma remained in control from there.

Moser said he believes the win will help players buy into his plan even more.

“I just think it keeps solidifying us about getting better, that our hard work is — things are adding up," he said.

Florida: The Gators already have solid wins over Florida State and Ohio State this season - the same Ohio State team that just beat No. 1 Duke on Tuesday. This loss isn't a resume killer.

Oklahoma: It's an impressive win for an Oklahoma team that was pieced together with a new coach, a few holdovers, transfer portal additions and talented freshmen. The Sooners were picked to finish seventh in the Big 12, but it appears they might be better than that.

Oklahoma quarterback Caleb Williams got a standing ovation after he was shown on the big screen. Earlier in the week, backup quarterback Spencer Rattler said he would enter the transfer portal and 2023 five-star quarterback Malachi Nelson decommitted from the Sooners.