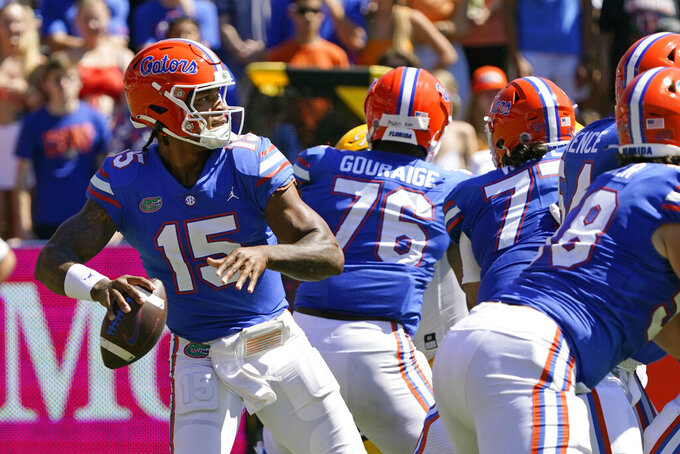 GAINESVILLE, Fla. (AP) — Jaydon Hill was supposed to wear a brace on his right knee Saturday. He had practiced with it for weeks. He saw it waiting for him on the sideline.

But he felt so good in warmups that he decided to leave it there. And he won't touch it now.

Hill intercepted two passes, including one he returned 49 yards for a touchdown, and Florida held on to beat Missouri 24-17 on Saturday to end a six-game skid in Southeastern Conference play.

Hill’s pick-6 was among a bevy of big plays that gave the Gators (4-2, 1-2 SEC) their first league victory in a year. His second interception ended a third-quarter drive that had reached Florida’s 16-yard line.

“Words can't even describe it,” Hill said. “Just grateful for being here.”

It was a breakout performance for Hill, a third-year sophomore who was playing his second game since returning from a torn anterior cruciate ligament that wiped out his 2021 season. Hill had been a projected starter this past spring but injured a different ligament in the same knee and needed arthroscopic surgery.

“What a story, right?” coach Billy Napier said. “The discipline to continue to rehab, to stay the course. He's got passion about this game. I always felt like watching him in spring ball that he was one of the best players that we had. That showed up today. ... He was a difference-maker today."

Hill’s play against the Tigers (2-4, 0-3) also backed up his bulletin-board comments earlier this week.

Missouri beat Florida five times in the previous 10 meetings. But the Gators entered Saturday's game as 10 1/2-point favorites according to FanDuel Sportsbook and looked like they might be in trouble after gaining just 65 yards in the first half.

But Florida's ground game took over in the second half, getting long runs from Montrell Johnson (36, 41), Trevor Etienne (39) and Anthony Richardson (32) to find the end zone.

The Gators finished with 231 yards rushing, including 212 after the break. Johnson led the way with 86 yards and a touchdown.

Still, it was Florida’s defense that clinched the game. The Gators stopped a fourth-and-2 play with 1:17 remaining to put the Tigers away.

“I feel like we're built to play winning football,” said Napier, who improved to 19-4 in one-possession games as a head coach.

Richardson completed 8 of 14 passes for 66 yards, with a touchdown and an interception. It was his fifth straight game with at least one turnover. He also ran for 45 yards.

“It’s not a lack of effort. It's not a lack of fight,” Mizzou coach Eli Drinkwitz said. "Just got to find a way. ... There’s some things we’re getting better at, but we’re not getting the results.”

Missouri: After oh-so-close losses to Auburn and Georgia, Missouri had another team on the ropes. The Tigers probably would have had a first-half shutout if not for a 48-yard punt return and a 49-yard run.

Florida: The Gators don’t have an identity six games into the Napier era. Many thought it would be the Richardson Show, but Richardson has at least one turnover in five consecutive games. Florida can’t stop the run and has little passing prowess.

Missouri receiver/punt returner Luther Burden injured his left ankle in the third quarter and was helped off the field. He had five receptions for 20 yards.

Former and longtime Florida administrator Jeremy Foley, credited with making the Gators one of the top athletic programs in the country, was one of nine inducted into the school’s Hall of Fame this weekend. Foley got in as an honorary letterwinner.

Missouri: Gets a bye week before hosting Vanderbilt on Oct. 22.