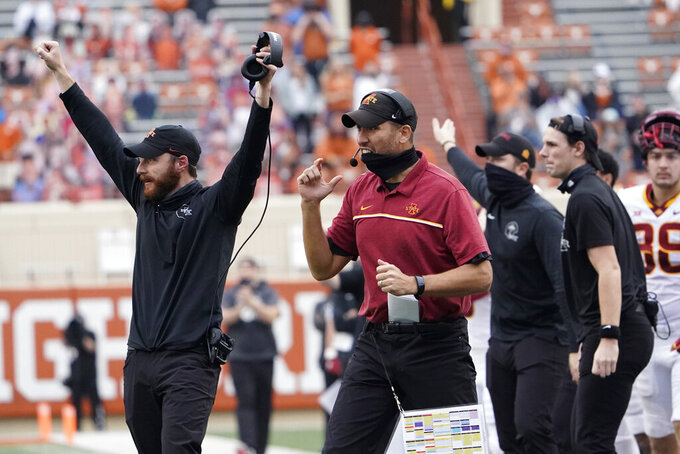 FILE - Iowa State head coach Matt Campbell, center, reacts with other team mambers during the second half of an NCAA college football game against Texas in Austin, Texas, in this Friday, Nov. 27, 2020, file photo. The Cyclones, who at No. 8 have their highest ranking ever in The Associated Press poll, play No. 12 Oklahoma on Saturday, Dec. 19, 2020, at AT&T Stadium in Arlington, Texas. (AP Photo/Eric Gay, File)

Jay Chapman earned his bachelor's and master's degree from Iowa State, was a member of the marching band and has attended all but one home football game since 1986.

The president of the Cyclone Gridiron Club booster group has seen a lot of losing. Some good players came through and there were some notable upsets. Still, in the 30 years prior to 2016, five coaches combined for only eight seasons of .500 or better.

And then along came Matt Campbell.

The 41-year-old Ohio native is seen as nothing short of a miracle worker by the Cyclone faithful. At a school that hasn't claimed even a share of a football conference title since 1912, Campbell, in his fifth year, has led Iowa State to the Big 12 championship game for the first time.

The Cyclones, who at No. 8 have their highest ranking ever in the AP Top 25, play No. 12 Oklahoma on Saturday at AT&T Stadium in Arlington, Texas.

“Man, is this what you envisioned or saw?” Campbell said, repeating a question. “I’ll be really honest. Early on we were trying to show that we could compete.”

Naturally, the Cyclones are underdogs this week, which bothers them not in the least.

In his four full recruiting classes, Campbell has signed a grand total of four four-star prospects and no five-stars, according to 247Sports composite rankings. Oklahoma has signed 57 four-stars and four five-stars over the same span.

“I just think it’s more proof that when you’ve got people who are aligned toward a vision, when you have people who are in it for the right reason and you have people willing to put their ego aside and continue to grow, that’s the beauty of the sport of football,” Campbell said. "It is still a team sport, it’s not individual, and great things can really occur when that happens.

“There are great examples in the history of college football of that occurring," he added. "It just so happens it hadn’t happened yet in Ames, Iowa. I think that’s something that has been enjoyable, you’ve created at least a sense of belief that great things can happen."

Campbell's tried-and-true mantra of building personal relationships with his players, emphasizing development and getting the most out of limited resources is the product of his being the son of a high school football coach and going through the powerhouse Division III Mount Union program as a player and young coach.

His back story reads like a sports movie script. Disenchanted by the lackadaisical attitude of some teammates the summer after his freshman year at Pittsburgh, he called his mom and asked her to come get him. They took back roads home to Massillon, Ohio, and as they drove by the Mount Union practice field in Alliance, Campbell noticed dozens of players doing voluntary workouts. He wanted to be a part of that.

It wasn't as if Campbell was just discovering Mount Union. His father, Rick Campbell, had played there and Matt's younger brother, Scott, followed him there.

Matt won three national championships and became a two-time All-America defensive end for Larry Kehres. The coaching giant who won 332 of 359 games and 11 national titles in 27 years said he can remember the specific moment when he knew Campbell would find success in coaching.

It was Campbell's sophomore season in 2000, and Mount Union was playing Wittenberg in the playoffs. Late in the first quarter, Campbell intercepted a throwback screen pass to set up a touchdown that broke open the game.

Kehres said Campbell was voracious when it came to film study, and he detected situations when Wittenberg was likely to call that misdirection play.

“Without that play, we might not have won,” Kehres said. “When you move one way and throw another, there’s a receiver and four blockers and all the defensive guys are on the wrong side of the field. That didn’t happen, thanks to Matt.”

Coaching stops at Mount Union and Bowling Green preceded his first head coaching job at Toledo, where he had been an assistant for three years. The Rockets went to four bowls with Campbell in charge for all or part of five seasons.

“Everybody kept coming back to this guy at Toledo, Matt Campbell, who they just said was an old-school football coach but was a young guy,” Pollard said. “We started looking more, and he’s a Division III guy, which that resonated with me because I was a Division III athlete. And his staff was made up of all guys who weren’t born on third base.”

The Cyclones have played some of their best football in the last month and have postseason honors candidates all over the field — players like quarterback Brock Purdy, running back Breece Hall, tight ends Charlie Kolar and Chase Allen, defensive lineman Ja'Quan Bailey and linebacker Mike Rose, among others.

Campbell's contract runs through 2025, and he was scheduled to earn $3.7 million this year before salary cuts tied to the COVID-19 pandemic lowered his pay to $3.45 million.

He received a contract extension last year after Florida State and other schools expressed interest in him, and Pollard said another extension is in order. Pollard said he blocks out ongoing chatter about Campbell eventually leaving for a more prestigious job.

“Matt does not have an agent, so you don’t have somebody out there shopping him, which is nice,” Pollard said. “Matt and I have always talked openly. I know what his ambitions are and what they’re not. He knows that we are in this together and at the point something comes available that may interest him, I’m going to be his biggest ally."

Chapman, the booster club president, said he gets the impression Campbell loves what he's doing at Iowa State and that the fan base isn't worrying about him taking off.

“If he wants to go somewhere, there's nothing we as fans can do more than sell out Jack Trice Stadium every game,” he said.

Jason Candle, a Mount Union teammate who succeeded Campbell as Toledo's head coach, said Campbell surely is laser-focused on beating Oklahoma and bringing the elusive conference title back to Ames.

“I’m sure deep down inside, after the season, he’ll reflect,” Candle said. “How could you not be proud of what you accomplished this year? Getting that program to the Big 12 championship is remarkable. It's not common. When you do uncommon things, you can’t sit back and think about it in the moment because you want to finish it off the right way, which those guys want to do. I’m sure he’ll sit back and have a smile on his face after the season.”