Indiana hopes to regain momentum by grouping against Idaho 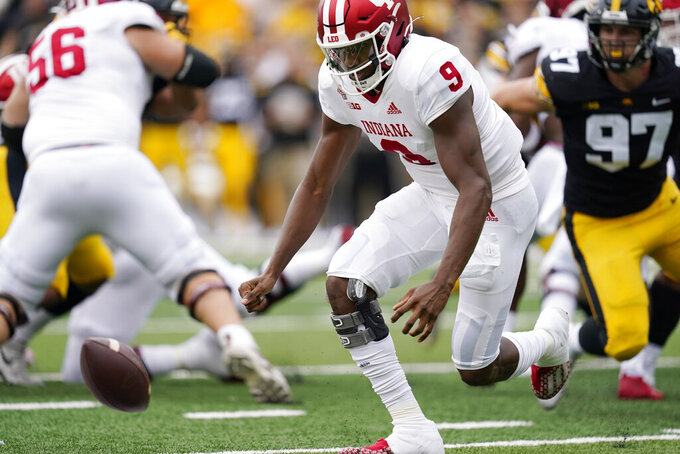 His teammates believe the same thing.

Of course, the Hoosiers know some are pointing to last week's blowout loss at Iowa and the Hoosiers' subsequent slide out of the Top 25 as evidence they were overrated. Rather than listen to critics, Penix and his teammates remain focused on trying to regain a little momentum Saturday against Idaho.

“I've just got to be better with the football," Penix said. “Those high throws, it’s my placement, my feet, my arm angles, things like that. I’ve just got to make sure I’m working on those things at practice so when it comes to the game, I’m ready."

Penix insists the corrections start with him after throwing a career-high three interceptions and having two returned for touchdowns in the worst start of his career.

He was only part of the problem, though. With two projected starters missing, the offensive line struggled to protect Penix or create holes for a ground game that gained just 2.5 yards per carry. The defense gave up a quick touchdown on Iowa's first possession.

Now, Allen wants to see the Hoosiers (0-1, 0-1 Big Ten) play up to the standards he's established.

“Bottom line for me is it’s how you respond to this kind of situation," he said. “I love our guys, believe in them. and am excited to see them learn from the things that happened on Saturday. Press on and move forward."

The Vandals (1-0) have returned to the Big Sky in 2018 after spending four seasons in the Sun Belt but they've lost all four games against FBS teams since then are 0-3 all-time against the Big Ten including a 79-7 blowout at Penn State in 2019.

Last week, Idaho built a 40-0 halftime lead over Division II Simon Fraser and pulled away from the Canadian school for a 68-0 victory. It was was Idaho's largest victory margin since 1923.

But coach Paul Petrino understands it will be a very different environment in front of a big crowd at Indiana and against an opponent looking to prove itself all over again.

“A lot of our guys never in their life get to play at a Big Ten stadium," coach Paul Petrino said after Saturday's victory. “I’ve been lucky enough that I’ve got to coach (in) all those different leagues, but some guys might not, so this is the one time they get to. So let’s go.”

Indiana's school record 11-week run in the Top 25 ended Tuesday, but there are more milestones to chase in the Hoosiers home opener.

They've won three straight and six of seven at Memorial Stadium, where they're 7-2 since 2019. They've also won 17 of their last 19 home openers.

Idaho did its most significant damage on the ground last week, rushing 43 times for 316 yards and seven touchdowns.

“From like the third play of the game, you could kind of tell that those guys were looking with the wide eyes,” nose tackle Rahsaan Crawford told The Lewiston (Idaho) Tribune.

Penix and All-American receiver Ty Fryfogle could move into the top 10 on Indiana's career lists this weekend.

Fryfogle needs enters the game with 13 TD career catches, needing one to move into a four-way for 10th — and just five away from matching Thomas Lewis.

Kendall was a unanimous all-conference selection during Idaho's six-game spring season largely because of penchant for blocking. During summer camp, Petrino hinted Kendall might play offense and defense. Last week, Kendall made his defensive debut and finished with one tackle — a 9-yard sack.