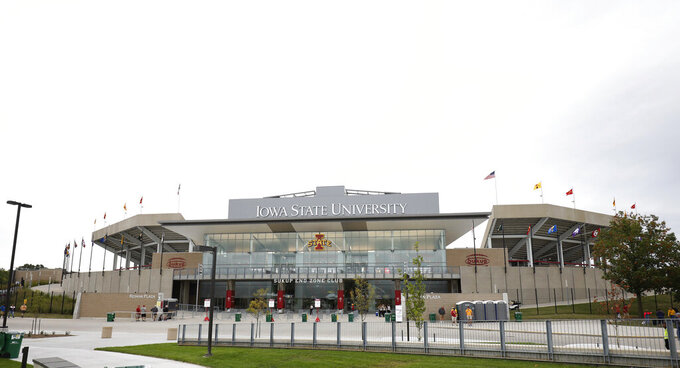 FILE - In this Aug. 31, 2019, file photo, Iowa State's Jack Trice Stadium is shown before an NCAA college football game against Northern Iowa, in Ames. Iowa State President Wendy Wintersteen has transferred oversight of the Iowa State Center, a series of buildings near Hilton Coliseum and Jack Trice Stadium, to the athletic department. It has also tabbed athletic director Jamie Pollard to be the head of a process to redesign the area as an “arts, culture, and community district.” The school announced the plan on Tuesday, Sept. 17, 2019, saying that Pollard and Iowa State Research Park President Rick Sanders will lead a feasibility study to build a multi-use development district between Hilton and Jack Trice _ which is now largely just parking lots. The proposed plan would also look into relocating commuter and football game day parking to a new paved parking area east of the stadium. (AP Photo/Matthew Putney, File)

The school announced the plan Tuesday, saying athletic director Jamie Pollard and Iowa State Research Park President Rick Sanders will lead a $300,000 feasibility study on the area, which is now mostly a series of parking lots. Iowa State President Wendy Wintersteen transferred oversight of the Iowa State Center, a series of buildings near the basketball coliseum and the football stadium, to the athletic department.

The plan will explore relocating commuter and football game day parking to a new paved parking area east of the stadium, with a pedestrian bridge connecting it to the stadium. Pollard said the space between Hilton and Jack Trice could potentially host a hotel and convention center at some point.

Pollard said it was too early to put a timeline or price tag on the proposed project. But he did note that the work — he likened it to recent renovations at Green Bay's Lambeau Field, home of the NFL's Packers — could be done more quickly because Iowa State already owns the land it plans to renovate.

"Dr. Wintersteen is putting in motion the potential for an unbelievable, game-changing (project)," Pollard said. "It has the potential for people to look back on this 20, 30, 40 years from now and go 'Wow. How did they figure out how to do this?'"

The plans represent the most ambitious project yet in a wave of recent ones surrounding Iowa State athletics.

The Cyclones enclosed the south end zone at Jack Trice with new seating and a large sports bar in a $60 million project before the 2015 season. Construction is also under way to expand the football facility and add a revamped entrance adjacent to the north end zone.

Iowa State announced in February that it is planning a $25 million renovation to Hilton that will expand the concourses, add additional concourses and improve the exterior lighting. That work, which Pollard said is "on pause" until the Cyclones can figure out how the acquisition of the Iowa State Center could affect that project, will be funded by the athletic department. The Cyclones also spent $2 million in 2013 to build a golf facility.

"This isn't your father's athletics department," Pollard said. "This athletics department has a bold vision for where we want to go. This vision is to be the absolute best athletics program in the nation. To do that, we have to act and behave like the programs we are aspiring to compete with."