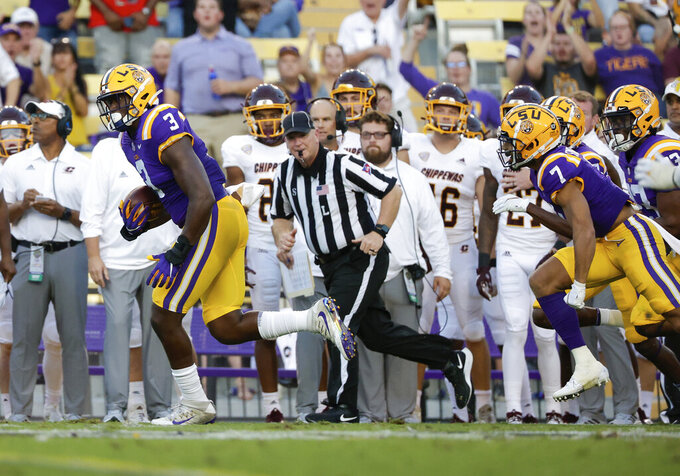 BATON ROUGE, La. (AP) — LSU quarterback Max Johnson gave some young, unproven receivers a chance to show what they could do.

Their highlight-reel catches gave LSU every reason to keep them involved.

Johnson passed for 372 yards and a career-best five touchdowns in less than three quarters, LSU defensive end Andre Anthony returned a fumble for a 33-yard score before leaving with an injury, and the Tigers topped Central Michigan 49-21 on Saturday night.

With the Tigers speeding up their tempo and checking less to the sideline before the snap, Johnson completed 26 of 35 passes.

“Went up-tempo to get some juice and get some things going,” Johnson said, adding that the faster-pace “helped us a lot. It allowed us to get lined up — and our opponent didn’t.”

Deion Smith, a freshman who had one catch through LSU's first two games, had touchdown catches of 28 and 40 yards in the first quarter as the Tigers (2-1) raced to a 21-0 lead.

“Everyone saw what we are capable of tonight,” Bech said. “My confidence is growing each game and we are going to put the country on notice.”

LSU coach Ed Orgeron figured it was only a matter of time before Smith and Bech head breakout games.

“It was fun to see them do it in Tiger Stadium; I’ve been seeing them do it all the time in practice," Orgeron said. "Those guys are going to be tremendous.”

Sophomore Kayshon Boutte scored his sixth touchdown this season on a 2-yard pass play that was essentially an end-around in which he took a short forward pitch.

The Chippewas (1-2) responded with safety Devonni Reed's interception of Johnson for a touchdown and backup Daniel Richardson's 18-yard touchdown pass to tight end Joel Wilson, which briefly pulled CMU to 42-21.

LSU freshman running back Corey Kiner closed the scoring with a 5-yard run, capping a drive in which he carried five times for 47 yards.

“We came in with an expectation that we would be able to play with these guys,” CMU coach Jim McElwain said. “It’s never easy to lose and I don’t care who you lose to. It hurts. We’ve got to do a good job of bouncing back.”

Central Michigan's first touchdown came when quarterback Jacob Sirmon spotted receiver JaCorey Sullivan uncovered along along the left sideline for a 78-yard catch and run — a play that bothered LSU coaches who've been trying to correct coverage busts that plagued the Tigers in a season-opening 38-27 loss at UCLA.

Central Michigan: Facing an LSU team that was motivated to clean up some early season stumbles in advance of SEC play only made matters more difficult for the Chippewas. Running back Lew Nicholls III, who was named to the Doak Walker watch list and rushed for 135 yards and a touchdown at Missouri in CMU's opener, managed just 18 yards on 12 carries at LSU.

LSU: The Tigers proved their passing game could function without an overreliance on Boutte. A handful of other receivers emerged against CMU, including three freshmen in Smith (five catches for 135 yards), Bech and Brian Thomas (two catches for 50 yards). But LSU gained just 23 net yards rushing through the first three quarters before finishing with 84 yards.

Central Michigan took the unusual step of traveling to Baton Rouge on the day of the game and flying home without spending a night in Louisiana. There's a crunch on hotel rooms in the region because of south Louisiana residents who've remain without power and home damage since Hurricane Ida struck on Aug. 29.

“It’s a long day, I’ll tell you that. But that’s no excuse,” McElwain said. “There’s a lot of people here in this part of the country that have a lot of things going on with the storms and what they’re dealing with.”

Anthony limped slowly to the locker room shortly before halftime. Orgeron did not provide a specific update after the game, but said he was concerned the news would not be good. LSU right tackle Austin Deculus left the game with an apparent lower leg injury in the fourth quarter.

LSU: Visits Mississippi State next Saturday in the SEC opener for both teams.