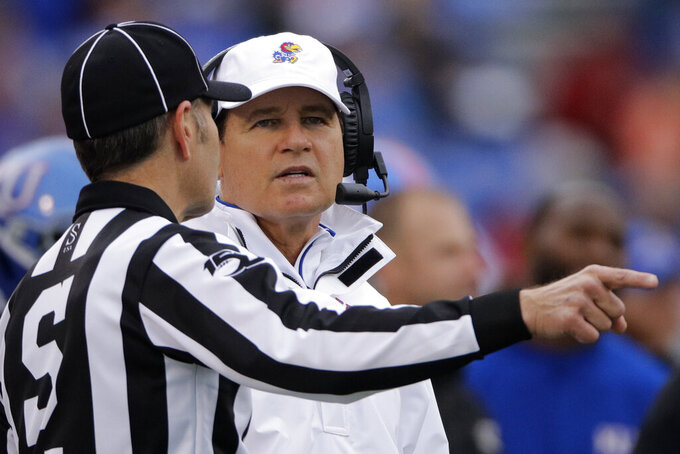 Kansas head coach Les Miles talks to an official during the first half of an NCAA college football game against Oklahoma, Saturday, Oct. 5, 2019, in Lawrence, Kan. (AP Photo/Charlie Riedel)

LAWRENCE, Kan. (AP) — Les Miles was fired by LSU in part because his offenses failed to score enough points.

He doesn't want the same thing to happen at Kansas.

So midway through an ugly first season with the Jayhawks, one marked by vast improvement on defense but more problems on offense, Miles announced Sunday that he had fired coordinator Les Koenning.

Brent Dearmon was promoted from his role as offensive consultant to take his place.

"This was a difficult decision, but it is in the best interest of our football program both now and in the future," Miles said. "There is still a lot of football left to play this season and I want to put our players in the best position to be successful, which is why I am making the change now."

They have next week off before visiting Texas on Oct. 19.

The 60-year-old Koenning was hired by Miles after spending last season as the running backs coach at Southern Miss. He also had been offensive coordinator at Duke, Alabama, Texas A&M, Mississippi State and South Alabama, among his many travels, and even served a stint with the Miami Dolphins.

But despite returning a bevy of experienced players, including quarterback Carter Stanley and All-Big 12 running back Pooka Williams, the Jayhawks have struggled to produce any kind of consistent offense.

It will be up to Dearmon to change that.

He served last season as the head coach of Bethel, an NAIA school based in Minnesota, where his team produced the highest-scoring offense at any level of college football. Dearmon led his alma mater to a 10-0 regular season, the best in school history, and averaged 540 yards and 55 points.

"I am humbled and grateful to Coach Miles for giving me this opportunity," Dearmon said. "There are a lot of talented young men on this team and it's up to us as an offensive staff to have them prepared each and every week, and that will be our number one priority."