Kentucky visits Missouri with both teams coming off big wins 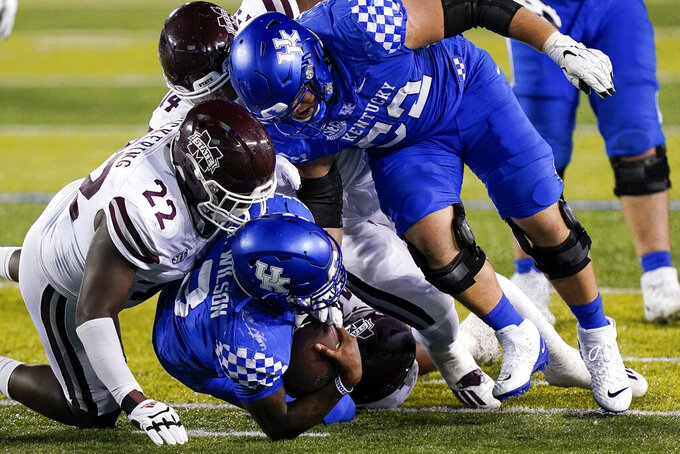 Now, two teams that have plenty of momentum are poised to tussle in Columbia.

In a game produced as part of the Southeastern Conference's massive schedule reshuffle, the Wildcats visit the Tigers on Saturday in contention in the SEC East. Kentucky's victory over the Volunteers in Knoxville was no squeaker — it was a 34-7 romp — and showcased a bruising offense and opportunistic defense for the rest of the league to see.

“A very talented Kentucky team,” Drinkwitz said. “Very good on both sides of the line of scrimmage. I think that's what sets them apart. They're very big. On defense, they've forced nine turnovers the past two football games and done a very good job of holding very good offenses in check.”

The Wildcats (2-2) scored their first 14 points against the Vols on pick-sixes by Kelvin Joseph and Jamin Davis in the second quarter. Their offense only gained 294 yards, but that was enough for a defense that forced two more turnovers and wound up scoring 17 points of the miscues in all.

“We enjoy a victory for less than 24 hours, depending on what time you play,” Kentucky coach Mark Stoops said, “but you enjoy it for a few hours and then it's back to work Sunday and hit the reset button. For our players, they hear it from me every Monday and you really have to look at it that way, whether it's a win or whether it's a loss.”

One of the challenges for the Tigers (1-2) was simply waiting to find out who they'd play.

The COVID-19 pandemic forced the postponement of their game against Vanderbilt last weekend to mid-December, giving them an impromptu week off. Their opponent this weekend was supposed to be Florida, but that game was swapped out for the Wildcats as the SEC tried to figure out a way to ensure very team completed its 10-game, conference-only schedule.

“I game-planned for three different teams last week. It's just a product of the situation,” Drinkwitz said. “Again, I'm very appreciative of commissioner (Greg) Sankey and the people at the SEC for making adjustments and finding a way for us to play this week. But yeah, you have to control what you control and maintain focus on what you can do.”

Drinkwitz has never coached against the Wildcats, who have beaten Missouri five straight times..

“I mean, I've joined in the Mizzou family and I've joined with the history, both good and bad,” Drinkwitz said, “so we absolutely understand it's been a while since we beat these guys. I don't think there's anybody in our team room who has beaten them since they've worn a Mizzou jersey. That gives us a little extra motivation.”

The Wildcats have forced 10 turnovers the past two games including nine interceptions, with three returned for touchdowns and a fourth setting up another score. Four takeaways at Tennessee included two pick-sixes to jump-start the 34-7 victory.

Marquan McCall will start at nose guard in place of Quinton Bohanna, who hurt his knee at Tennessee. Bohanna had started the past 23 contests for Kentucky and 28 of 41 games overall in the middle of the Wildcats' tough defensive line.

Freshman quarterback Connor Bazelak has been a revelation for Missouri after taking over for TCU transfer Shawn Robinson a few weeks ago. He should be familiar to the coaching staff at Kentucky, too. Bazelak was a four-star recruit who grew up in Dayton, Ohio, which is only about a 2-hour drive from the Kentucky campus in Lexington.

Other than erupting for 559 yards against Mississippi, Kentucky has struggled offensively. The Wildcats might have found a bright spot at Tennessee, though, outgaining the Vols 294-287 and putting together second-half touchdown drives of 76 and 54 yards. More important, they were able to use run and pass effectively after getting only one going in other contests.