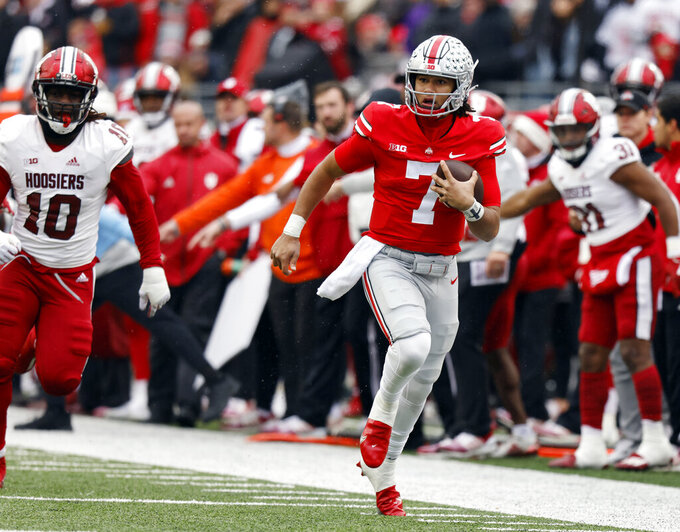 COLLEGE PARK, Md. (AP) — Maryland coach Michael Locksley is up against it this week when his team hosts No. 2 Ohio State.

Perhaps the schedule can provide some help.

“They've got a big game after ours, I think," Locksley said this week. "I don't know who they play, but they play somebody after our game, a pretty big game.”

It is, of course, common knowledge that the Buckeyes face Michigan the weekend after this one, meaning Locksley's Terrapins are all that stand between Ohio State and an unbeaten record heading into that titanic rivalry game. The point he's tried to make to his team is that Maryland has nothing to lose Saturday. That won't be the case for the Buckeyes.

Ohio State, however, is used to focusing on other opponents while never really forgetting about Michigan.

“We’re working (toward) the game at the end of the year, every day out of the year," Buckeyes coach Ryan Day said. “So that’s not something that is out of the ordinary to know that that’s always in the back of our minds.”

Ohio State (10-0, 7-0 Big Ten, No. 2 CFP) has never lost to Maryland. In fact, the Buckeyes have scored at least 62 points in four of the last five meetings with the Terps. The one exception was in 2018, when Ohio State barely survived a 52-51 overtime thriller. That was also the last time the Buckeyes played Maryland the week before the Michigan game.

If the Terps (6-4, 3-4) are going to keep this close, they may need another offensive breakthrough like that 2018 game. Maryland is in theory capable, with an offense that includes quarterback Taulia Tagovailoa and plenty of talent at running back and receiver. But lately the Terrapins have been slipping.

They lost 30-0 at Penn State last weekend, and the previous week they fell 23-10 at Wisconsin. It was a disappointing couple of games after the team went 3-1 in October.

The Ohio State offense, on the other hand, is one of the game's constants. The Buckeyes beat Notre Dame 21-10 in their opener, and since then they've been held under 44 points only once.

It’s anybody’s guess outside the Ohio State program whether receiver Jaxon Smith-Njigba will get on the field this year. He injured a hamstring in the opening win over Notre Dame and has played little since. Day won’t say much about his progress.

But the Buckeyes haven’t missed him too much. Marvin Harrison Jr. is among the top 10 in the country with 969 yards receiving, and he has 11 touchdown catches. Emeka Egbuka has 832 yards and eight TDs. Both are second-year players.

“I mean, if you had said to me that was going to happen this year, I wouldn’t have believed you, but here we are,” Day said. “That’s football, you have to overcome these types of things."

Tagovailoa enters the game with 7,023 yards passing at Maryland. Only Scott Milanovich (7,301) is ahead of him on the school's career list.

The chances are good that Tagovailoa will take over the top spot at some point, although he was held under 100 yards passing in each of the past two games.

“Me personally, just getting the ball out of my hand quicker,” Tagovailoa said. “As an offense, we've just got to go back to the basics.”

The Buckeyes’ feature running backs, TreVeyon Henderson and Miyan Williams, are dealing with injuries. Henderson was in street clothes for last week’s win over Indiana, and Williams departed with a leg injury after rushing for 147 yards and a touchdown in the first half. One of the backups, Chip Trayanum, also was out last week with an unspecified injury.

Without talking specifics, Day said some or all could be back this week.

“I think we’ll get hopefully at least two of them back and then go from there,” he said Tuesday.

First-year back Dallan Hayden and former walk-on Xavier Johnson, who has been used primarily as a wide receiver in his four-year career, are likely to get most of the carries if the others are still ailing.

Locksley said a key to containing Ohio State is to get to the quarterback, but that hasn't happened much this year. Opponents have only seven sacks this season.

Maryland has allowed only 16 points in the third quarter this season. Only Michigan (nine) has yielded fewer among FBS teams.