With Lawrence back Clemson-Notre Dame meet for ACC title 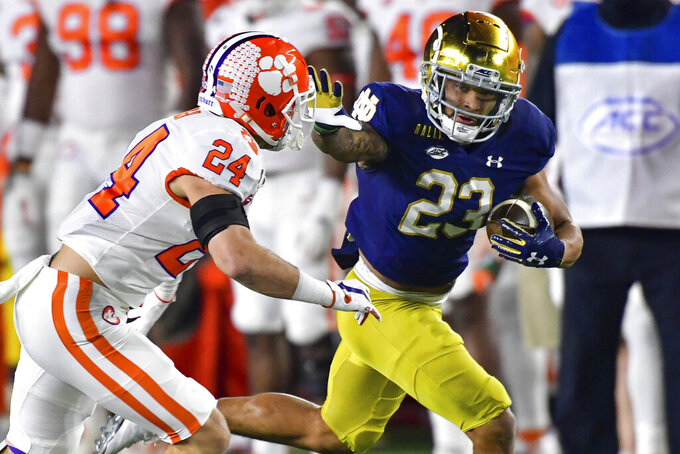 FILE - Notre Dame running back Kyren Williams (23) fends off Clemson Tigers safety Nolan Turner (24) on his way to a touchdown during the first quarter of an NCAA college football game in South Bend, Ind., in this Saturday, Nov. 7, 2020, file photo. The Notre Dame Fighting Irish beat the Clemson Tigers in a thrilling 47-40 shootout earlier this season. The big question now is if they can do it again. (Matt Cashore/Pool Photo via AP, File)

CHARLOTTE, N.C. (AP) — The stage is set for a marquee Top 25 showdown in the Atlantic Coast Conference title game this weekend.

Everyone watching will be eager to see if Notre Dame can upend Clemson again now that the Tigers have starting quarterback Trevor Lawrence back in the lineup.

The Fighting Irish beat then top-ranked Clemson in a thrilling 47-40 double-overtime shootout earlier this season. But Lawrence was sidelined because of COVID-19, and spent the game watching from the sideline in a mask.

But the projected No. 1 pick in the 2021 NFL draft will be front and center in Saturday's highly anticipated rematch.

“He’s a proven winner,” said Notre Dame defensive end Daelin Hayes. “He’s played in a lot of big games. That calm, that cool. ... You can’t put a price on that experience.”

Hayes has seen what Lawrence can do first hand, remembering well how the long-haired QB led Clemson to a 30-3 win over the Irish in the Sugar Bowl in 2018 en route to winning the national championship.

“It feels good to be at the point where we knew we would be," Lawrence said. "We weren’t perfect, obviously, but you don’t have to be perfect. These next three games, hopefully, are huge. That’s been our goal the whole time.”

To play three more games the Tigers may have to win Saturday.

No two-loss team has ever been selected for the College Football Playoff since its inception in 2014.

While Lawrence's return is the key storyline entering the game, Clemson's offensive production wasn't necessarily the problem in the first matchup. Freshman D.J. Uiagalelei threw for 439 yards and two touchdowns and ran for a third score in the last meeting, although the Tigers were held to 1 yard per carry on the ground.

Clemson's defense was the bigger issue.

Ian Book, the winningest QB in Notre Dame history, lit up Clemson for 310 yards passing, while sophomore Kyren Williams ran for 140 yards and three TDs against an overwhelmed defense.

But Clemson hopes that unit will be bolstered by the return of linebacker James Skalski, who is considered the heart and soul of the Tigers defense. Like Lawrence, he didn't play in the first game.

The Tigers have won five straight ACC titles under coach Dabo Swinney, while Notre Dame is seeking its first ever conference title after spending 131 years as an independent. Win or lose, unbeaten Notre Dame would seem to be a lock for the four-team playoff.

Some other things to watch in the Clemson-Notre Dame showdown on Saturday:

IRISH O-LINE ON THE MEND

Swinney was impressed by Notre Dame’s “big monster offensive linemen” the last time the teams met. Notre Dame rushed for 208 yards and totaled 518 total yards. Since that Irish victory, the line has dealt with a season-ending foot injury to junior center Jarrett Patterson, a high ankle sprain to his sophomore replacement Zeke Correll and an emergency appendectomy on fifth-year right guard Tommy Kraemer.

“Just the way we’ve been throwing guys in there and seeing them step up has been awesome,” said senior captain and right tackle Robert Hainsey who along with senior left guard Aaron Banks and fifth-year left tackle Liam Eichenberg make up the unit that is a semifinalist for the Joe Moore Award for the “toughest, most physical offensive line in the country.”

Since admitting frustration after a 11 of 19, 106-yard passing performance in a 12-7 home victory against Louisville Oct. 17, Book has stepped up his game in the final six, throwing for 1,668 yards and 12 touchdowns. During that span he also has rushed 57 times for 339 yards (5.9 yards average) and three scores.

“I love the way Ian Book plays; he never lets anything get to him,” said Notre Dame wideout Javon McKinley.

Swinney believes Lawrence has the makeup to succeed in the NFL, including the fortitude not to pay attention to what Clemson’s coach calls “thumb gangsters” — those smartphone, social media critics who belittle without facts. “You can either handle that or you can’t,” Swinney said.

Notre Dame's defense held Travis Etienne and the Tigers to 1 yards per carry in the first game, while averaging 5.1 yards per rush on offense.

“We are centered around stingy run defense, and making teams become one dimensional,” said Irish coach Brian Kelly. “Then it gives you the opportunity to dictate down and distance. and we’ve been really good on third down.”

Clemson was 4 of 15 on third downs conversions vs. Notre Dame in the first meeting.

Clemson back up linebacker Jake Venables had surgery for a broken arm and will miss the rest of the season. Venables, the older of two sons of Clemson defensive coordinator Brent Venables with the Tigers, was fifth on the team with 31 tackles. “He wasn’t perfect, but very proud of him,” Venables said of his son.