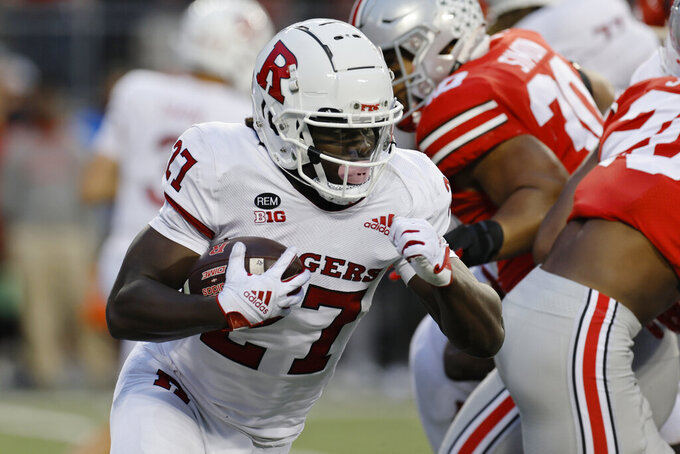 Rutgers running back Samuel Brown, left, runs up field against Ohio State during the second half of an NCAA college football game, Saturday, Oct. 1, 2022, in Columbus, Ohio. (AP Photo/Jay LaPrete)

Brown was hurt late in his breakout game last week, when his 28 carries were the most by a Scarlet Knights player since 2014. The native of Philadelphia had 101 yards in the win over Indiana.

Kyle Monangai returned to the lead role in the backfield and had just 29 yards on seven attempts in a 31-0 loss at Minnesota on Saturday afternoon. NJ Advance Media reported before kickoff that Brown will miss the rest of the season, and Rutgers coach Greg Schiano announced after the game that he will have a procedure done next week.

Initially, both Brown and Schiano indicated optimism about his return.

The final decision on the surgery was made on Thursday night.

“It’s sad for him. He had a great climb this year and had a really good game last week, but that’s football,” Schiano said, adding: “He’ll get back to being a player. It’s just going to be a little bit."

Another top prospect for the Scarlet Knights is in recovery mode. Quarterback Gavin Wimsatt made his second career start against the Gophers, but he took a shoulder-to-shoulder hit at the end of a run and had his head snap back hard against the turf midway through the fourth quarter.

“He’s being examined by the doctors, so we’ll kind of see where that goes,” Schiano said, declining to confirm Wimsatt had a concussion. “He was feeling a little bit better at the end, but it’s something you’ve got to watch now. There was a couple things going on there, so I’ll leave it at that.”

Wimsatt threw one of the two interceptions by Minnesota safety Tyler Nubin and also lost a fumble on a bobbled snap. He went 6 for 17 for 68 yards and was replaced by Noah Vedral, the sixth-year player who started the previous three games.

“We’re trying to get him experience because the only way you get better is to go through it,” Schiano said, later adding: “I’m hopeful he’ll be OK, but I know I said that last Saturday and look where we turned out, so you never really know.”