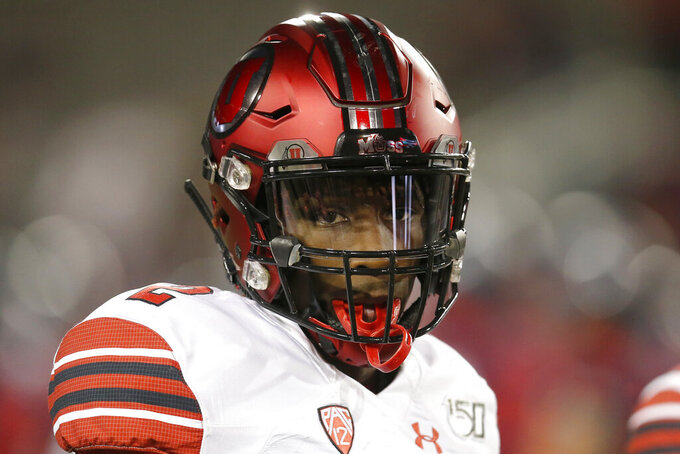 FILE - Utah defensive back Aaron Lowe (2) is shown in the first half of an NCAA college football game against Arizona, in Tucson, Ariz., in this Saturday, Nov. 23, 2019, file photo. Police arrested a man early Sunday, Oct. 3, 2021, in connection with the shooting death of Utah sophomore cornerback Aaron Lowe. Homicide detectives with the Salt Lake City Police Department located Buk M. Buk, 22, in Draper and booked him on charges of aggravated murder, attempted murder and felony discharge of a firearm. (AP Photo/Rick Scuteri, File)

Homicide detectives with the Salt Lake City Police Department located Buk M. Buk, 22, in Draper and booked him on charges of aggravated murder, attempted murder and felony discharge of a firearm. Online jail records do not indicate if he has an attorney who can speak on his behalf.

“Because of the incredible work of our homicide detectives, we have justice for Aaron,” Salt Lake City Police Chief Mike Brown said during a news conference Sunday. “When I talked to Aaron's mother on Monday, I made her a promise. We would find her son’s alleged killer.”

Brown did not discuss a motive and declined to answer questions from reporters. But he did say the shooting was not a targeted attack on the university, its athletic department or Lowe, nor was it gang-related.

Lowe, 21, was shot at a house party just after midnight Sept. 26 after other, uninvited guests were asked to leave, police said. A 20-year-old woman also was shot and critically injured at the party, which was thrown hours after the Utes beat Washington State 24-13.

Police had previously received noise complaints about the party, but officers didn't respond because they were dealing with other emergency calls, police spokesman Brent Weisberg has said. When dispatchers got a call about a fight with a weapon more than an hour later, officers immediately went to the house in the Sugar House neighborhood.

Lowe's death came less than a year after his teammate Ty Jordan was killed in an accidental shooting.

Lowe was a high school teammate of Jordan’s in Mesquite, Texas, and switched his jersey from No. 2 to No. 22 to honor his friend after the 19-year-old died of a gunshot wound to the abdomen on Christmas night 2020.

In August, Lowe was named the first recipient of the Ty Jordan Memorial Scholarship, voted on by the team.

Lowe appeared in 16 combined games on special teams his first two seasons and played in four games this season.