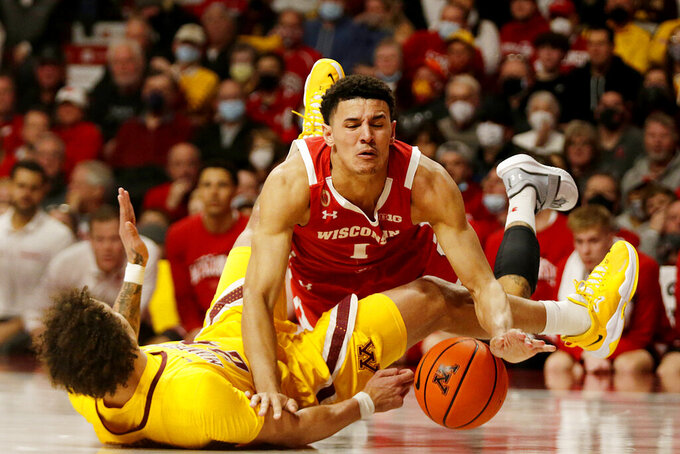 Wisconsin guard Johnny Davis (1) falls after a collision with Minnesota guard Sean Sutherlin during the second half of an NCAA college basketball game Wednesday, Feb. 23, 2022, in Minneapolis. Davis was called for charging. (AP Photo/Andy Clayton-King)

MADISON, Wis. (AP) — Wisconsin guard Johnny Davis drives to the basket with the same ferocity he used to show while running over defenders as a high school quarterback.

Davis' emergence as the Big Ten player of the year and a likely NBA lottery pick has been one of college basketball's biggest surprises this season. The 6-foot-5 sophomore believes his football experience made him a better basketball player.

“Playing football and taking shots, as a quarterback especially, it just prepares you for that physicality and allows you to get knocked down and get back up real quick,” Davis said.

Davis has averaged 19.7 points and 8.2 rebounds to earn Associated Press All-America first-team honors and help Wisconsin win a share of the Big Ten title. Davis’ Badgers (24-7) are seeded third in the NCAA Midwest Region and play Friday against Colgate (23-11) in Milwaukee.

“I think people give him a lot of credit for being an incredible scorer, but he’s an incredible basketball player,” teammate Brad Davison said. “He does everything. Defensively. Rebounding. He’s not out there (just) trying to score. He’s trying to win.”

They played football at the suggestion of their father, Mark Davis, who had a 31-game stint with the Milwaukee Bucks in 1988-89 and played 13 seasons of professional basketball. He wanted his kids to play plenty of sports rather than specializing in one.

“Even when we tried to tell him to take some slides in football and run out of bounds, he would still be willing to (say), ‘Hey, If we need that yard, I’m going to run that guy over and get that yard,'“ said Tony Servais, his high school football coach.

That attitude eventually carried over to basketball.

“Football taught him to be tougher,” Mark Davis said. “That’s why, when he drives to the basket, the contact means nothing to him. He’s going to play through it.”

That approach can have its drawbacks.

Davis injured his left ankle during Wisconsin’s regular-season finale when he landed awkwardly on a drive after taking a shot to the face from Nebraska’s Trey McGowens. Davis returned for the Big Ten Tournament but shot 3 of 19 in a quarterfinal loss to Michigan State.

The Davis twins aren't the only Wisconsin basketball players with football experience. Davison and D’Mitrik Trice – who played at Wisconsin from 2016-21 – were high school quarterbacks. Reserve forward Carter Gilmore was a wide receiver.

“We’ll recruit kids, and they’ll be like, ‘Hey, now that you offered me a scholarship and I’m maybe going to be a Division I player, should I stop playing football?’ “ Wisconsin assistant coach Joe Krabbenhoft said. “We’ll say, ‘No. No. No. Keep playing football. And if you’re not playing football, maybe it’s something you should try.’ It translates.”

While football improved Davis’ toughness, his desire was never an issue. That was evident from his elementary-school days, when he and his twin brother raced home to play one-on-one each day.

His confidence became more apparent after he helped USA Basketball win gold at the FIBA U19 World Cup last summer. Davis had averaged 7 points, 4.1 rebounds and 24.4 minutes on Wisconsin’s senior-laden team last season. After getting selected for that World Cup team, Davis returned to campus knowing he could make a much bigger impact.

“Not that he ever probably didn’t think he was the best player in the gym, but you could see it on his face the first day he came back,” Wisconsin coach Greg Gard said. “It was like, ‘Whoa. OK.’ The confidence was the biggest thing, just the swagger he came back with.”

Even so, Davis didn’t anticipate this level of success. Neither did his dad.

“I was expecting maybe a 15-point scorer,” Mark Davis said. “We’d probably end up fifth, sixth, seventh in the Big Ten and him having a good season to where we’d be like, ‘Here’s what we’ve got to do to concentrate on the draft for next season, probably coming out after his junior year.’”

Davis instead is a probable top-10 selection in this year’s draft.

The Maui Invitational served as the catalyst. Davis averaged 23.7 points in victories over Texas A&M, Houston and Saint Mary’s.

“Playing three games in three days is a grind and really makes you bond together as a team,” Davis said. “I felt that was a turning point for the whole season.”

He hasn’t looked back since while performing his best away from home. He had 37 points and 14 rebounds at Purdue, 24 points at Ohio State, 22 points and 15 boards at Illinois, 25 points at Michigan State, 30 points at Indiana. Wisconsin was 12-3 away from Madison.

“He wants to win every argument or card game,” Krabbenhoft said. “He’s one of those guys. He isn’t walking up from a game unless he’s won that game. He’s just a competitor like that. Winning drives him.”

Just as it did when he was leading a huddle.

“I loved playing football,” Davis said. “I still miss playing. But I just think I had a better career and a lot more going for me in basketball.”