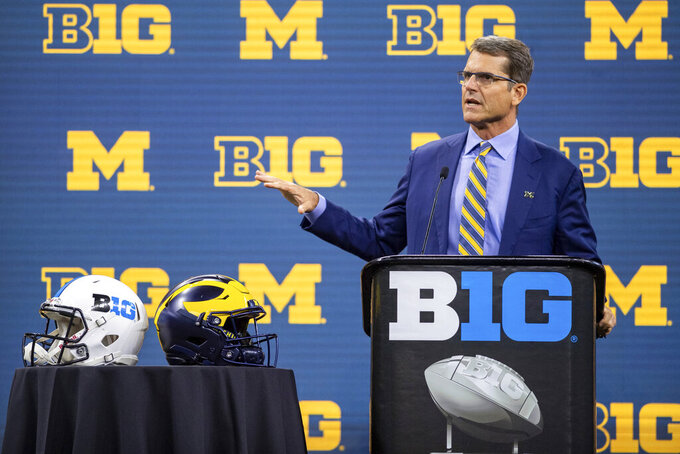 ANN ARBOR, Mich. (AP) — Michigan will soon get a chance to accomplish something it failed to do last season.

The Wolverines were winless at home during the pandemic-shortened season. They finished 2020 with two wins, four losses and three games canceled due to a COVID-19 breakout.

Michigan, unraked in the preseason for the first time since coach Jim Harbaugh's debut season in 2015, can't wait to host Western Michigan on Saturday.

“We’re really hungry, especially coming off the season we had last year," receiver Mike Sainristil said. “That wasn’t really Michigan football. Of course I’m not happy we had a losing season, but it was a reality check for us."

The Broncos were 4-2 last season, playing only Mid-American Conference schools. They return 19 starters on both sides of the ball. Kaleb Eleby is back under center after throwing 18 touchdown passes and just two interceptions last season.

Likewise, coach Tim Lester is a fan of the quarterback he has been preparing to face.

Harbaugh named Cade McNamara his starter on Monday, an announcement that Lester said did not surprise him based on how the quarterback played last season.

“He gets rid of the ball on time," Lester said. “He has good feet. He can extend plays. Quarterbacks with good timing have success. He was by far the most efficient guy they had last year."

Unlike last season, the Big House will welcome fans, and that fires up Harbaugh.

“I’m excited about it," he said. “I think all our players are. I think Ann Arbor is. Most people I’ve talked to can’t wait to be back in that stadium. The only thing I could really compare it to is a Super Bowl environment."

Lester said his players are excited about competing in front of about 100,000 fans after playing in front of none last season. While the Broncos may not be prepared for the sights, they will be used to the sounds after practicing with piped-in music.

“They’ve heard the fight song plenty of times now. Plenty," Lester said. “I don’t know if their band can go as loud as our speakers go. It will be familiar when they hear it.”

Harbaugh said 99% of his players have been vaccinated. Western Michigan's entire team has at least started the vaccination process.

“We’re in a position where we can focus on (football), and not all the other noise," Lester said.

Michigan beat Western Michigan 49-3 in 2018 in the previous meeting.

“There were seven guys on the defense playing in the NFL," Lester said. “That was a rough day.”

After being strict with his diet to fit former coordinator Don Brown's scheme that required quicker linemen, Smith had a different approach at the dinner table over the last several months.

“I let loose a little bit,” he said with a grin.

Harbaugh and Lester are two of 17 head coaches at the highest level of college football who played for the team's they're leading.

Harbaugh, who starred for the late Bo Schembechler in the mid-180s, is 49-22 over six seasons

Lester was a four-year starter in the late 1990s. He has not had a losing season in four years at Western Michigan, where he followed P.J. Fleck, who won big enough with the Broncos that he was hired to lead the Minnesota Golden Gophers.