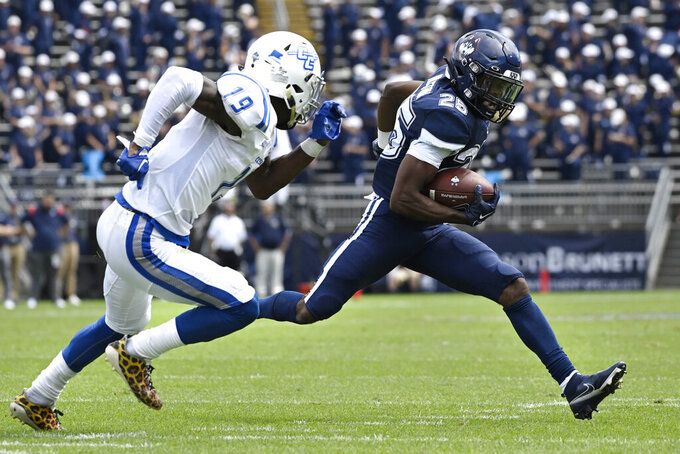 ANN ARBOR, Mich. (AP) — Jim Harbaugh has been here before.

For most coaches, benching the quarterback who just led him to a fantastic season would be a once-in-a-lifetime decision. With J.J. McCarthy starting Saturday for No. 4 Michigan against Connecticut, Harbaugh has now done it twice in 10 years.

Cade McNamara, welcome into the shoes of Alex Smith.

In 2011, Smith led Harbaugh’s San Francisco 49ers to a 13-3 record and an NFC West division title. In the divisional round of the playoffs, Smith ran for one touchdown and threw for another in the final 2:11 to get San Francisco to the NFC championship game.

Smith must have thought his job was safe the next season when the 49ers started 6-2, but he had a concussion in the next game and never got his job back. Colin Kaepernick took over and threw for touchdowns in a 32-7 win over the Chicago Bears, and ended up leading the 49ers to the Super Bowl. After the season, Smith was traded to the Kansas City Chiefs.

A decade later, McNamara is coming off a season where he led Michigan to a win over Ohio State, a Big Ten championship and its first berth in the College Football Playoff. And now, he’s McCarthy's backup.

McNamara, though, didn’t lose his job because of an injury. Harbaugh announced before the season that he would start the opener against Colorado State and McCarthy would start against Hawaii. With Michigan winning the games by a combined 90 points, both quarterbacks got into both games.

McNamara wasn’t terrible, going 13 of 24 for 162 yards with a touchdown and an interception. McCarthy completed 15 of 16 passes for 259 yards and three touchdowns while running for 66 yards and another score.

In the end, it was an easy choice.

“It’s very similar, very similar to that, with Alex and Colin, because they were both playing great at one point in the season,” Harbaugh said. “Alex Smith, he was playing great ball. Just led us to the NFC championship the year before, and then Colin got his start on a Monday night against Chicago. And he lit it up.

“So, yeah, it’s not a matter of somebody losing (the job). I think we got two really good quarterbacks, two starting quarterbacks, two championship quarterbacks. A lot like that Monday night game that Colin played against the Bears, that looked a lot like what J.J. was able to do.”

The underdog Huskies should probably be going into the game with a 1-1 series record against Michigan. On Sept. 21, 2013, the 15th-ranked Wolverines were down 21-7 late in the third quarter before two Fitzgerald Toussaint touchdowns and a Brendan Gibbons field goal pulled out a 24-21 win.

Huskies quarterback Zion Turner, a true freshman, is 1-2 after a record-setting high school career at St. Thomas Aquinas in Fort Lauderdale. In three years as a starter, Turner won three Florida state championships and a national championship while going 37-2.

Harbaugh and Connecticut coach Jim Mora have had long coaching careers, but will be facing each other for the first time. They nearly crossed paths in the Pac-10, but Harbaugh went from Stanford to the 49ers just as Mora was going from the Seattle Seahawks to UCLA.

They did play against each other once, although neither was exactly a star. On Sept. 17, 1983, Harbaugh was a freshman back-up quarterback at Michigan when they lost 25-24 at Washington, where Mora was a walk-on defensive back.

WHO NEEDS A QUARTERBACK?

McCarthy and McNamara haven’t needed to put up big numbers in the first two games because the Wolverines have rushed for 501 yards and nine touchdowns. Thirteen players have carried the ball, with seven scoring at least once, but Blake Corum has led the way with 164 yards and two touchdowns on 22 carries.

That’s not good news for a Connecticut defense that gave up 156 yards and three touchdowns in last week’s 48-14 loss to Syracuse.