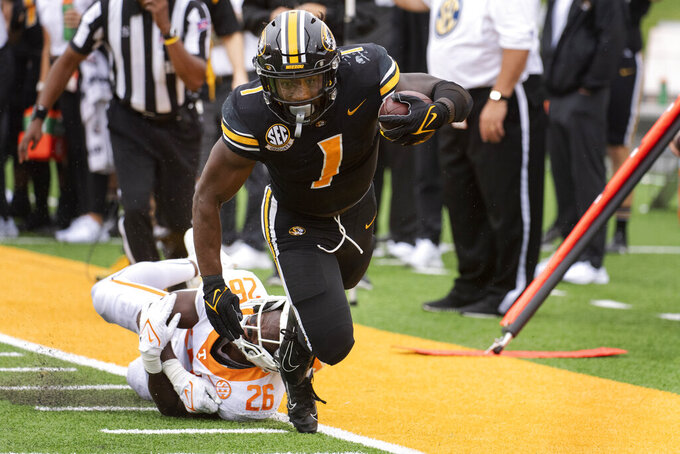 Missouri running back Tyler Badie, right, is tackled by Tennessee defensive back Theo Jackson during the first half of an NCAA college football game Saturday, Oct. 2, 2021, in Columbia, Mo. (AP Photo/L.G. Patterson)

Since the start of the season, Missouri players have headed into practice each week knowing exactly where they stand on coach Eli Drinkwitz's depth chart.

After the Tigers were blown out 62-24 by Tennessee, every position was up for grabs when they reconvened for practice. Incumbents such as quarterback Connor Bazelak and running back Tyler Badie are almost certain to be on the field Saturday against North Texas, but there are plenty of other positions that could see some changes.

In that respect, it's almost as if the Tigers (2-3) have headed back to fall camp this week.

They certainly could use a reset.

Their defense surrendered 667 yards total offense to the Vols, including 458 on the ground, and allowed them to score on their first nine possessions. Tennessee averaged more yards per play (11.5) in the first half than the Tigers scored points (10).

The performance was a big reason why Drinkwitz fired defensive line coach Jethro Franklin earlier this week and replaced him with veteran coach Al Davis, who had been a defensive analyst.

“We weren't connected," Drinkwitz said. “When I watched the tape, what we're saying we're supposed to do and what we're doing isn't working. So whatever it is, it wasn't working, so there was a disconnect.”

Missouri's offense wasn't a whole lot better. Bazelak was just 27 of 44 for 332 yards with no touchdowns and two interceptions. Badie averaged 2 yards per carry on 21 attempts.

The game is a big opportunity for North Texas (1-3) to pick up a marquee win over an SEC opponent.

“Offensively, they do a lot of different motions so you have to keep your eyes right in the run game and they have some explosive receivers, too. Defensively, they are big on the back end, are long and athletic and can run,” Mean Green coach Seth Littrell said. "I just want to see our guys go out and compete and play hard for four quarters. The wins and losses take care of themselves."

Tigers cornerback Ennis Rakestraw tore his ACL during practice Tuesday and will miss the rest of the season. Akayleb Evans, Allie Green IV and Ish Burdine are expected to take the snaps in his place.

Missouri is one of nine teams in the country to score on every red-zone trip this season, scoring 15 touchdowns with two field goals — the best TD efficiency among them. LSU is the only other SEC school to be perfect in the red zone.

Mean Green cornerback Upton Stout made his first career start at Louisiana Tech and played well enough that he earned another start against Missouri. Stout is among the most decorated recruits to North Texas in years.

“Something that really sticks out with him is his mentality," Mean Green safety Makyle Sanders said. “He’s a really good, physical, technical dude. He’s always working on his technique, and that’s a great mentality to have.”

The Mean Green should be salivating after watching the Tigers' run defense last week. They are averaging more than 200 yards per game, and tailback DeAndre Torrey is averaging 129 yards through the first four games.

“The coaches are leaning on me," Torrey said, "and I know if I go down, our chances go down. Not saying I’m the team or anything like that, but I just want to be there for my teammates whenever I can to take strain off them.”

STICKING WITH THE OFFENSE

Despite all the Tigers' problems on defense, Drinkwitz said he's leaving corrections in the hands of new coordinator Steve Wilks and his staff. The Tigers have enough to worry about on the other side of the ball, where Drinkwitz serves as his own offensive coordinator and calls the plays on game day.

“There were critical mistakes that have to be corrected. You can't bury your head in the sand and say they didn't happen,” Drinkwitz said, “but there's also things that you just got to move on from. You can't dwell on it. I've told the team and the staff that Tennessee doesn't have to define us or this season, but if we let it, it will.”