Mullen takes No. 5 Florida, title hopes back to Mississippi 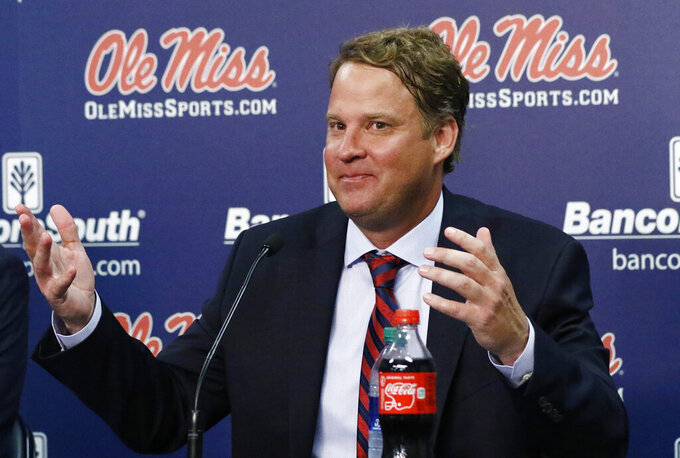 FILE - In this Dec. 9, 2019, file photo, Lane Kiffin responds to reporters questions at a news conference, after being introduced to Mississippi fans as their new NCAA college football head coach at The Pavilion on the campus in Oxford, Miss. Mississippi State's Mike Leach and Mississippi's Lane Kiffin brought big names and offensive pedigrees to the Magnolia State. But they drew huge challenges for their debuts, with the Bulldogs visiting defending national champion and No. 6 LSU and the Rebels hosting No. 5 Florida. (AP Photo/Rogelio V. Solis, File)

Dan Mullen should hope this trip to Ole Miss goes as well his first — or his last.

The Florida coach has three wins in Oxford, Mississippi, with the two most memorable visits coming in 2007 with the Gators and nine years later with Mississippi State.

This one could top both given it’s Florida opening game of its most anticipated season in a decade and comes against new Rebels coach Lane Kiffin.

The fifth-ranked Gators have high hopes for a Southeastern Conference championship and a spot in the College Football Playoff. Those are logical steps in Mullen’s third season in Gainesville after Florida went 10-3 in 2018 and 11-2 last year. Mullen returns most of his staff as well as 12 starters, including preseason all-SEC quarterback Kyle Trask.

“There’s definitely a lot of expectations,” Florida cornerback Marco Wilson said. “But the coaches do a great job of just helping us focus on the right things. … And, really, everything in everybody’s mind is focusing on winning and doing everything we need to help the team out.”

Mullen spent nine seasons at Mississippi State, going 5-4 against “the team up north" in the annual Egg Bowl. His Bulldogs scored eight touchdowns and totaled 566 yards in a 55-20 romp at Vaught-Hemingway Stadium in 2016, Mullen’s last visit.

His first trip wasn’t quite as one-sided. Florida beat the Rebels 34-20 in 2007, with Mullen calling the plays for future Heisman Trophy winner Tim Tebow. Tebow accounted for 427 yards and four touchdowns in that one.

Mullen landed in Starkville two years later and enjoyed his time in the Magnolia State. He won his first three Egg Bowl matchups.

“I remember going to a high school once and … I had a lady come up and say, ‘Coach, I pray for you every day,’” Mullen said. “I said, ‘Oh, that’s so nice of you.’ She goes, ‘I’m an Ole Miss fan. I pray somebody comes hires and gets you heck out of this state as soon as possible.’

“So now I left, maybe they like me a little bit.”

They love Kiffin, who was hired to replace Matt Luke and lead the program out of NCAA sanctions that hindered recruiting and depleted the roster.

This is Kiffin’s third stop in the SEC, having served as Tennessee’s head coach in 2009 and returning as Alabama’s offensive coordinator (2014-16). He spent the last three years at Florida Atlantic.

“I have no idea what’s going to happen Saturday, but we’ll be there. I know that much,” Kiffin said. “Being a first-year coach, it would be hard to tell you what our personality will be with such limited exposure to the players. We don’t have some easy non-conference games to figure it out, so we’ll do the best we can.”

Kiffin declined to say whether quarterback John Rhys Plumlee or Matt Corral will start, but said “there’s a good chance both of them will play.” They bring different styles, with Plumlee being the more dangerous runner and Corral putting up better passing numbers.

“We’re very fortunate to have two really good quarterbacks, quarterbacks that have seen SEC football and done really well with it,” left tackle Nick Broeker said. “It’s a really good problem to have.”

Kiffin said his team is coming off two straight weeks with no positive tests for the coronavirus and hopes the trend continues heading into the opener. Florida, meanwhile, had nine positive tests over the last two weeks and could be missing several players in the opener.

Mullen declined to say which guys are quarantined due to a positive test or contact tracing.

“Ultimately, it’s pretty easy for the team because we know want to play this season, and if a bunch of guys have corona, then we won’t be able to,” tight end Kyle Pitts said. “So you can pick one side of the fence or the other. But I feel like we all bought in. We want to play.”