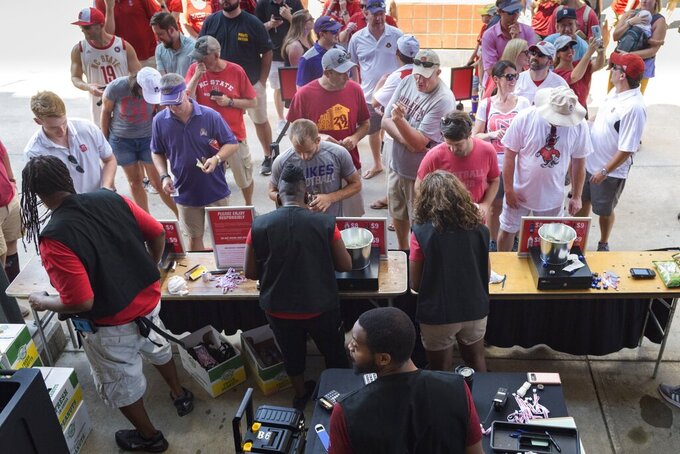 FILE - Fans line up at a concession stand that sells beer during an NCAA college football game between North Carolina State and East Carolina at Carter Finley Stadium in Raleigh, N.C., Saturday, Aug 31, 2019. Nebraska would sell alcohol at the Big Ten wrestling championships in March if university regents approve a policy revision at its meeting next week, opening the possibility of booze being available at Cornhuskers football games. Athletic department leaders have long considered selling alcohol at their venues, and their interest has increased recently as they've looked for ways to enhance the fan experience. (Bryan Cereijo/The News & Observer via AP, File)

LINCOLN, Neb. (AP) — University of Nebraska regents on Friday cleared the way for campus leaders to decide whether to sell alcohol at their sports venues, moving Nebraska football fans a step closer to being able to buy booze from vendors at Memorial Stadium.

The regents also approved an amendment to the lease with Pinnacle Bank Arena allowing alcohol sales at the Big Ten wrestling championships March 5-6.

Athletic department leaders have long considered selling alcohol at their venues. At least half the schools in the major conferences, and eight of the 14 in the Big Ten, sell alcohol.

The regents' vote means the university president and chancellors can authorize the sale and consumption of alcohol at athletic events on their respective campuses. The change also would allow alcohol advertising and sponsorships on university property with the approval of the chancellor.

Nebraska-Omaha has been selling alcohol at its on-campus sports venues since 2015, so Friday's vote established a consistent policy across all campuses and clears the way for chancellor Ronnie Green and university president Ted Carter to begin alcohol sales inside Memorial Stadium.

“Whether we might see alcohol at Memorial Stadium, we don't have an answer for you at this time,” Carter said. “What I can tell you is that it won't be this fall.”

Tom Osborne, the Cornhuskers’ College Football Hall of Fame coach from 1973-1997, voiced strong opposition to alcohol sales when he was athletic director from 2007-12.

Alcohol sales have been a dependable money-maker for athletic departments across the country. Schools are looking for ways to keep fans coming to stadiums and arenas and, in the last year, recoup some of ticket, concession and merchandise revenue lost during the pandemic.