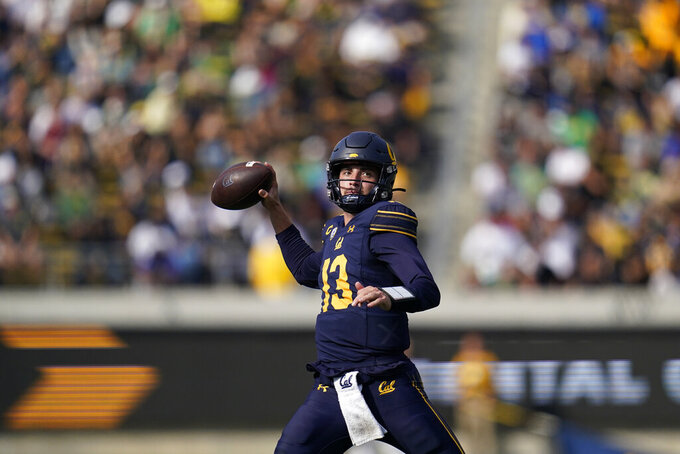 California quarterback Jack Plummer looks to throw a pass against Oregon during the second half of an NCAA college football game in Berkeley, Calif., Saturday, Oct. 29, 2022. (AP Photo/Godofredo A. Vásquez) 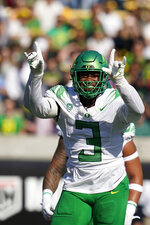 BERKELEY, Calif. (AP) — Once Oregon shook off a sluggish start, there was no stopping the Ducks' high-powered offense.

Bo Nix threw three touchdown passes and ran for three more scores to lead No. 8 Oregon to a 42-24 victory over California on Saturday for its seventh straight win.

“It’s nice when you don’t perform your best, you miss a few opportunities in the red zone, and you still do what we did on offense," Nix said. "It’s a good thing, but we still have to get back to work and be hungry.”

The Ducks (7-1, 5-0 Pac-12) broke open the game with three TDs in a span of less than seven minutes of game time spanning halftime and rolled to another win.

Oregon hasn't lost since a season-opening 46-point loss to Georgia, winning six of the seven games by at least 15 points.

The Golden Bears (3-5, 1-4) lost their fourth straight game as their defense could do little to slow down Nix and the Ducks and the offense couldn't keep up. Cal has lost 22 of its last 23 games against teams ranked in the top 10.

“We have to make them earn it more than we did,” coach Justin Wilcox said. “They have a very good team, a lot of talent out there. Defensively we had too many uncharacteristic coverage busts and when we were in good shape we didn't fo a good enough job getting the ball out of the quarterback's hand.”

Nix threw for 412 yards and accounted for six touchdowns combined through the air or on the ground. The Ducks gained 586 yards for the game, the most against the Bears in six seasons under Wilcox.

“I think it’s hard to stop our team right now when we’re consistent and operating at a high level, regardless of really who the opponent is,” coach Dan Lanning said. “When we did get stopped, it was really more so us stopping ourselves. Jack Plummer threw for 214 yards and one TD for Cal.

Oregon scored three TDs in the second quarter to take charge of the game. Nix ran it in from the 4 on the opening play of the quarter.

He bounced back from an interception near the goal line on the next drive to lead the Ducks to two more TDs in the second quarter, scoring on a 1-yard run and then throwing a 12-yard TD pass to Bucky Irving following Trikweze Bridges' interception of Plummer to make it 21-10.

Oregon then took the second-half kickoff and scored another TD when Noah Whittington took a short pass from Nix and turned it into a 29-yard score. That gave Oregon it's third TD in a span of 6:29 on the game clock.

Nix added a TD run and touchdown pass in the fourth quarter to put the game out of reach.

“We haven’t seen our best yet,” Lanning said. “I’m excited to see where we can go, but we have to tap into that. It’s a choice that we have to make. Hopefully that’ll carry over in the future.”

Nix now has 20 touchdown passes and 11 touchdown runs, becoming the fifth player with at least 20 TD passes and at least 10 TD runs in the first eight games of a season.

Oregon: The Ducks won convincingly despite missing some chances to make it even more lopsided. They were stopped twice on fourth down in the red zone, had a drop on a third-down deep pass that could have gone for another score and threw an interception in the red zone. Those didn't prove costly against the Bears but could be an issue when the schedule gets tougher down the stretch.

California: The Bears' only win against a top 10 team in the last 19 seasons came five years ago against Washington State. They could afford few mistakes against the Ducks if they wanted another. But Plummer threw an interception on the first drive and then another late in the first half that set up the score that made it 21-10. Cal hadn't turned the ball over in four of the last five games.