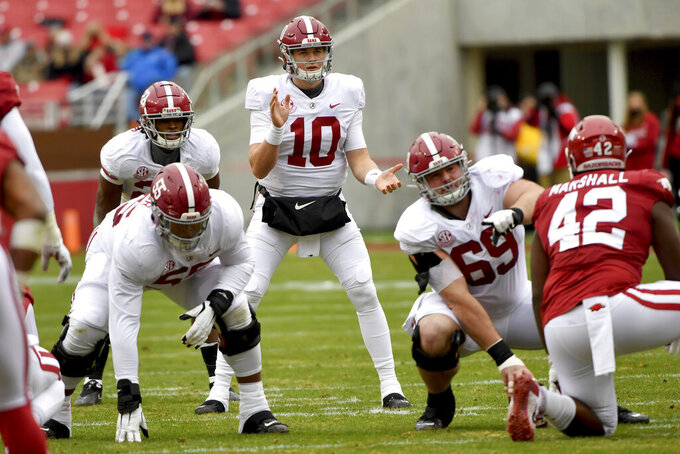 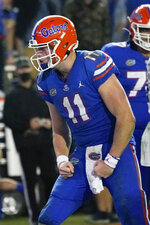 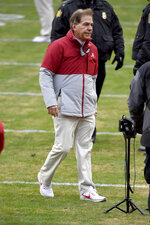 Alabama did its part to set up a Southeastern Conference championship game between two College Football Playoff contenders.

No. 11 Florida didn't hold up its own end, stumbling to an upset loss to LSU in a game settled on dueling long field goals and a costly penalty.

Now the unanimous No. 1-ranked Crimson Tide (10-0) confronts a Florida team trying to overcome an emotional hangover from that loss. It dealt a potentially fatal blow to the Gators' hopes of making the College Football Playoffs.

“I expect us to have a great week of practice, have a lot of energy and a lot of excitement," Florida coach Dan Mullen said Sunday. "This is what you work for, the opportunity to go play in this game.

“So I don’t know how much of an effect that will have on us.”

Florida (8-2) did lose in painful fashion.

The Gators fell 37-34 to the Tigers after Cade York's 57-yard field goal with 23 seconds remaining amid a dense fog. Florida's Marco Wilson was flagged for throwing tight end Kole Taylor's shoe down the field after what would have been a big third-down stop.

Alabama had no such drama in polishing off the regular season with a 52-3 romp over Arkansas to remain on track for a certain playoff berth with a win — and maybe even a competitive loss.

“I feared that our players might be looking forward to the SEC Championship game in terms of playing up at Arkansas,” Tide coach Nick Saban said. “I was really pleased that ... we didn’t start out great, but we played pretty well in the game.

"I think it's a challenge for any coach with any team when you're in that situation.”

The game Saturday in Atlanta won't quite pit two Top 10 teams against each other, but it matches up explosive offenses and Heisman Trophy candidates at quarterback.

Kyle Trask, who had three turnovers in the second quarter against LSU, directs the nation's top passing offense. Mac Jones and Alabama have the No. 6 passing team.

The Tide is third in scoring and the Gators 12th.

Each time the winner went on to win the national title. Those scores seem like defensive struggles given how explosive both offenses are.

“Obviously they've got talent at every position all over the field,” Mullen said. "There aren't a lot of weaknesses in any aspect of their game. Obviously, they can put up a lot of points offensively. They can do it in their running game.

“They can do it in the short passing game where they're getting their athletes in space and let them go make big plays. Or they can do it with shots deep down the field.”

Saban, in understated fashion, on the Gators: “They’ve certainly made their share of explosive plays this year, that’s for sure.”

But now the Gators and Wilson have to regroup and repair their psyches after their second three-point loss of the season. Mullen said there was plenty of blame to go around besides Wilson's lapse in judgment.

“That's certainly not the reason we lost the game,” he said. “There were many, many factors that went into that.”

Both teams are hoping to get injured players back. Florida star tight end Kyle Pitts missed the LSU game with an undisclosed injury.

“Talking to our trainers, they expect him to be cleared to play this week,” Mullen said.

Saban is hoping that linebacker Christian Harris can return from a shoulder injury.