No. 1 Alabama puts streak on line vs Florida in packed Swamp 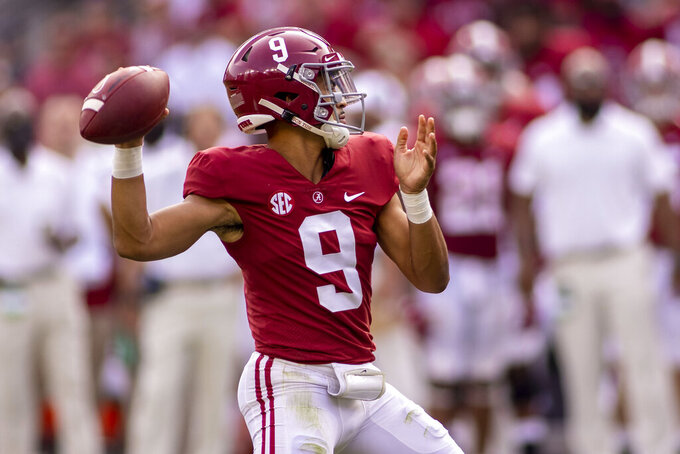 Alabama quarterback Bryce Young (9) throws during the second half of an NCAA college football game against Mercer, Saturday, Sept. 11, 2021, in Tuscaloosa, Ala. (AP Photo/Vasha Hunt)

Series record: Alabama leads 27-14 and has won seven in a row.

Defending national champion Alabama puts its 16-game winning streak on the line in the Southeastern Conference opener for both teams. Florida is looking to avenge a 52-46 loss in the SEC title game last December and potentially shake up the College Football Playoff picture for the third straight week.

Alabama QB Bryce Young vs. the Swamp. The Gators will have just their third sellout in coach Dan Mullen’s four seasons, and a raucous home crowd was instrumental in winning the previous two. LSU’s Joe Burrow was sacked five times and threw two interceptions, including one that was returned for a touchdown, in a 27-19 loss at Florida Field in 2018. Auburn’s Bo Nix was picked off twice in a 24-13 loss in Gainesville the following year.

Alabama: Stepping in for 2020 Heisman Trophy winner DeVonta Smith, Jameson Williams has seven receptions for 157 yards and two touchdowns in two games and now faces a defense down a starting cornerback. Florida’s Jaydon Hill (knee) is out for the season, and the Gators are still trying to decide between Avery Helm and Jason Marshall for the spot opposite all-SEC performer Kaiir Elam.

Florida: All eyes will be on Florida backup QB Anthony Richardson for the third consecutive game. Richardson has been beyond impressive off the bench, raising questions about how long Mullen will stick with Emory Jones as the starter. Richardson, a redshirt freshman from Gainesville who is dealing with a tweaked right hamstring, has 275 yards rushing and two touchdowns to go along with 192 yards passing and two scores in limited action.

Alabama is the first No. 1 team to visit the Swamp since Miami in 2002. The defending national champion Hurricanes dominated that one, winning 41-16. ... The Tide has won 31 consecutive games against teams from the SEC’s Eastern Division. The Crimson Tide’s last loss to an East team came at then-No. 19 South Carolina on Oct. 9, 2010. … Young is the only player in Alabama history with seven touchdown passes in his first two starts. … Alabama has scored at least 30 points in 28 consecutive games, a streak that’s tops in the Football Bowl Subdivision. … Mullen is 0-10 as a head coach against the Tide, losing all nine meetings while at Mississippi State and reaching double digits last December with the Gators. … Florida leads the FBS in rushing, averaging 381.5 yards a game on the ground, and ranks third in total yards.