No. 1 Alabama visits Texas in first matchup since 2009 title 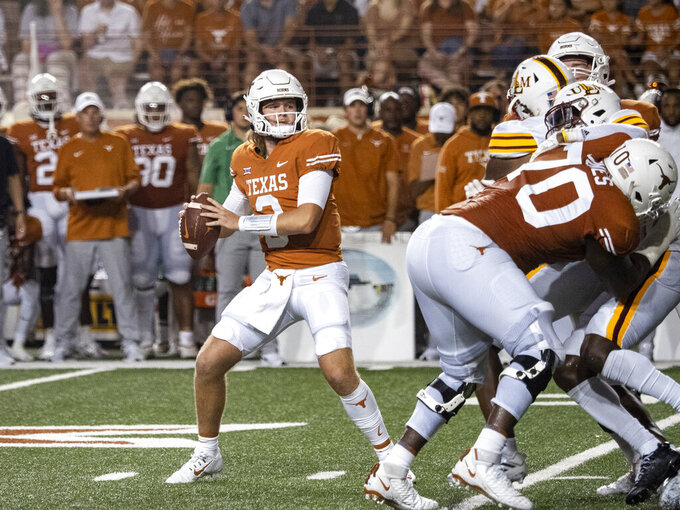 Line: Alabama by 20 1/2 according to Fanduel Sportsbook.

If any win could start some serious “Texas is back” talk, this would be it. Former Alabama assistant Steve Sarkisian could get one over on his old boss Nick Saban and inject some serious juice back into a Texas program that has been out of the national title picture since 2009. A big game by Alabama quarterback Bryce Young only increases the pending drumbeat for another Heisman Trophy campaign.

Texas freshman left tackle Kelvin Banks vs Alabama edge rusher Will Anderson. Texas thinks Banks will be a star someday, but Anderson is already college football's standout defensive player after his 17 1/2 sacks last season. Banks must protect Texas freshman quarterback Quinn Ewers' blindside from Anderson. That matchup could set the tone for just about everything the Longhorns do on offense.

Alabama: All eyes are on Young every week. That's just the way it goes for a returning Heisman winner. He passed for five touchdowns and ran for another last week against Utah State. He's the veteran playmaker on the field and will be expected to deliver again in a big game.

Texas: WR Xavier Worthy. The Longhorns can stay in the game if they establish a deep threat to Worthy. He's one of the quickest players on the field every week and has a knack for big plays. Ewers struggled to find his deep passing in against Louisiana-Monroe.

The first matchup of heavyweight programs since Alabama beat Texas in the 2009 season national championship game, the first of Saban's six titles with the Tide. The most recent was in 2020 when Sarkisian was the Alabama offensive coordinator. ... The game is a preview of a future rivalry. Texas is scheduled to join the SEC in 2025. ... The Alabama band decided not to travel because Texas puts visiting bands in the upper deck of the stadium and requires it to use part of the visiting team ticket allotment.