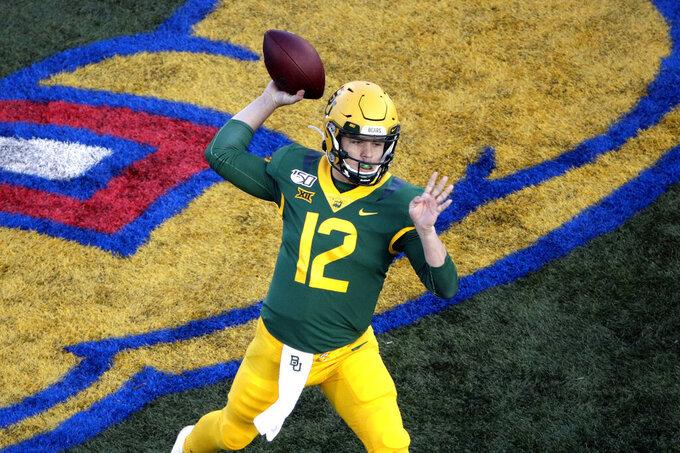 LAWRENCE, Kan. (AP) — No. 11 Baylor tuned up for a rematch with Oklahoma in the Big 12 title game in fine fashion.

JaMycal Hasty ran for three touchdowns, the Bears forced lowly Kansas into committing six turnovers and they cruised through the second half to a 61-6 victory on Saturday at Memorial Stadium.

“I’m really proud of them not just today but over the past two years, the process that they’ve had, the toughness, the grind,” said Rhule, who now has a chance to avenge a meltdown loss to the seventh-ranked Sooners earlier this month — their only loss of the season.

With a spate of upsets Saturday, the Bears are still in the College Football Playoff picture, too.

Carter Stanley was just 13 of 25 for 92 yards with three of the Jayhawks’ four interceptions in his final game. Manny Miles also threw an interception while Pooka Williams was held to 97 yards rushing.

Baylor jumped on the Jayhawks midway through the first quarter when Gerry Bohanon scored from six yards out. Brewer found Tyquan Thornton with a 51-yard touchdown pass a few minutes later, and Hasty scored the first of his trio of touchdowns to make it 21-0 at the end of the first quarter.

The rout was most certainly on.

Baylor added a pair of field quals along with Trestan Ebner’s 14-yard touchdown run to carry a 34-0 lead into halftime, and Hasty tacked on a pair of touchdown runs to start the second half.

The lone highlight for Kansas came when Miles, the backup quarterback and the coach’s son, threw an 11-yard touchdown pass to Andrew Parchment. And even that was spoiled by a failed two-point conversion.

Kansas punter Kyle Thompson landed three punts inside the 20, including one that dropped at the 1-yard line. But it’s rarely a good day when the punter is the standout performer.

The high-powered Baylor offense entered the Kansas red zone nine times, converting each time. It was an impressive display by a team that could be headed for a shootout against the Sooners.

Williams became the second player in program history with consecutive 1,000-yard rushing seasons. He accomplished the feat despite missing the season opener because of a suspension.

Baylor: The Bears were rolling against Oklahoma when the teams met earlier this month, only to let a big lead slip away in a 34-31 loss. But they’ve taken care of business the past two weeks, and their defense has been a big reason. They knocked off Texas 24-10 before shutting down the Jayhawks.

Kansas: Another lackluster season in Lawrence came to an end, though there is hope for the future after a couple of impressive performances. The Jayhawks finally won a road game by beating Boston College and they had Texas on the ropes before losing a shootout in Austin.

Baylor meets Oklahoma in the rejuvenated Big 12 title game while the Kansas coaching staff hits the recruiting trail in search of more talent on both sides of the ball.