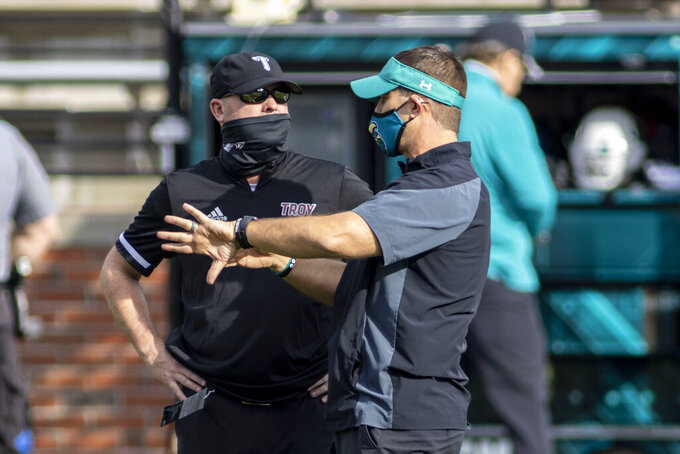 TROY, Ala. (AP) — Grayson McCall and Coastal Carolina put together a final drive that was perfection, just like their regular season.

Jaivon Heiligh caught a 23-yard touchdown pass from McCall with 45 seconds left and No. 11 Coastal Carolina preserved its first unblemished regular season with a 42-38 win over Troy on Saturday.

McCall needed just 45 seconds to move the Chanticleers (11-0, 8-0 Sun Belt Conference), who didn’t have any timeouts, 75 yards for the winning score. He completed all four of his passes on the drive, three of them to Heiligh.

They survived a sandwich game between an upset of then-No. 8 BYU and the league title game against No. 17 Louisiana-Lafayette.

“We found a way to get it done and that’s what championship teams do,” Coastal coach Jamey Chadwell said. "It wasn’t pretty and it looked like it was dire straits.

The Trojans (5-6, 3-4) didn't make it easy for the highest-ranked team to visit Veterans Memorial Stadium.

Backup quarterback Jacob Free, who replaced an injured Gunnar Watson in the fourth quarter, hit Tray Eafford on a 6-yard touchdown with 1:20 left. The play was set up with an interception by star middle linebacker Carlton Martial, who also had 21 tackles.

“We know Coastal’s got a good football team, but I thought we fought them tooth and nail and really had an opportunity to win the game there at the end,” Troy coach Chip Lindsey said.

“Coach always preaches get vertical so I stuck my foot in the ground and got vertical, saw the dude slipped and missed, and touchdown from there," Heiligh said. "I knew the dude behind me wasn't going to touch me."

CJ Marable ran for 120 yards and two scores, including an early 59-yarder, and also caught a touchdown pass.

The result was a perfect season in an imperfect performance.

“It’s amazing,” said Coastal defensive back Alex Spillum, who set up a score with a late interception and 55-yard return. “As a guy who’s been here losing season after losing season, it’s special. We’re definitely going to take this all in and enjoy it.

Watson completed 25 of 37 passes for 260 yards with a touchdown and an interception. Free threw an interception on his first series following a goal line stand by Troy, but he later gave the Trojans a chance.

Kaylon Geiger had 103 receiving yards for Troy and Reggie Todd had 101, including a 41-yard touchdown.

The Trojans made a short kickoff instead of attempting an onside kick and Martial got the sack.

Free fumbled on a sack by Jeffrey Gunter to end any threat on Troy's final drive.

Coastal Carolina: Got off to a fast start and kept its special season perfect with gutty play at the end.

Troy: Managed just three points after getting the ball inside Coastal's 25 on the first two drives, but had first-half scoring drives of 13, 14 and 14 plays. Trojans are 1-3 against ranked teams at home.

Chadwell had griped about the Sun Belt making Coastal playing this game while Louisiana had an open date. The Chanticleers had some injuries, including left tackle Antwine Loper, who the coach said would miss the title game.

Troy kicker Evan Legassey booted field goals of 42, 28 and 23 yards in the first half. The last one came as time expired to cut it to 21-16 at the half.

Marable has become a bit of a Troy killer. He ran for a touchdown and added the two-point conversion with 30 seconds left last season to give Coastal a 36-35 victory. This time he had 20 carries and three catches en route to his third straight 100-yard rushing effort.

“The last three week's he's been on fire,” Chadwell said.

Coastal Carolina hosts Louisiana with the Sun Belt title on the line.