No. 12 Irish prepare for visit from long-time rival Purdue 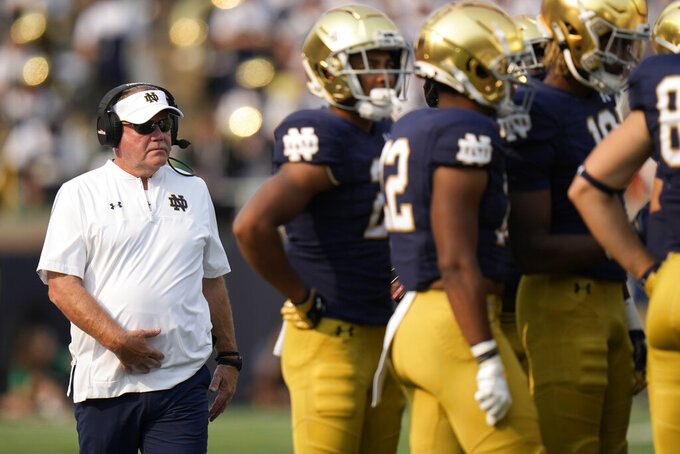 SOUTH BEND, Ind. (AP) — No. 12 Notre Dame has looked shaky at times in its first two games of the season, two nail-biting wins. Coach Brian Kelly is sure of one thing: He wants a faster start against Purdue on Saturday.

“I think the biggest thing on me is we lacked intensity coming out,” Kelly said after the Fighting Irish rallied for a 32-29 victory over Toledo.

The Irish defense has surrendered four plays of 60 yards or more this season while a rebuilt offensive line has allowed 10 sacks and not generated much a running attack going into the game against the Boilermakers (2-0).

“We have to rise to the level of our preparation – our preparation has to be better,” said Kelly, who will tie Knute Rockne as the school’s winningest football coach with 105 if Notre Dame runs its home winning streak to 26.

This week, the intensity and preparation jumped several notches, according to nose tackle Kurt Hinish and center Jarrett Patterson.

“That hasn’t been Notre Dame football – playing cutthroat, coming-after-you, detail-oriented football,” Hinish said of giving up 33.5 points and 393.5 yards per game so far despite 10 sacks and four takeaways. “Practice (Tuesday) was intense. That’s the way it should be every day.”

Patterson, who has four new linemates from a season ago, said improving is about building chemistry with “communication and working on our basic fundamentals.”

“That’s the biggest thing we can get better at right now,” Patterson said.

While Notre Dame safety Kyle Hamilton has been receiving attention in many mock NFL drafts, so has Karlaftis. Coan remembers playing against Karlaftis when he quarterbacked Wisconsin to a 45-24 victory in 2019.

“He was unbelievable as a freshman,” Coan said. “I can’t imagine what he is like now.”

Kelly provides an idea: “He is probably, arguably, the best pass rusher in college football. We have to have a plan for him.”

Purdue will be without running back Zander Horvath, who played at nearby Mishawaka Marian High School but is sidelined after surgery for a broken leg suffered against UConn. King Doerue and Dylan Downing will share the running duties.

“It’s (Doerue’s) time to step up and do his thing and have some fun with it,” Brohm said. “Dylan is a little newer, but he’s picked up things fast enough.”

Doerue and Downing combined for 146 yards on 26 carries at UConn.

“(We’re) Thunder and Lighting,” said Downing, a freshman transfer from UNLV. “I feel like he’s faster and quick. I’m more straight-line, power, more physical. I feel like that (combination) will tire a defense out more quickly.”

Brohm chose the 6-foot-5, 215-pound Plummer as his starting quarterback because of his ability to avoid turnovers. In the first two games, Plummer has not thrown an interception. Purdue’s only turnover this season came on a field goal fake in the 30-21 season-opening victory over Oregon State.

A TALE OF TWO QBS

Coan, who had a dislocated finger popped back into place and then threw the game-winning 18-yard TD pass against Toledo, doesn’t mind sharing duties with freshman Tyler Buchner, whose feet are more elusive.

“He’s just an amazing playmaker,” Coan said of Buchner, who ran for 68 yards and threw for 78, including a 55-yard TD pass. “He made some huge plays down the field, helping us move the football. He definitely helped us winning and I’m thankful for that.”

Notre Dame junior rover Jack Kiser grew up in Royal Center (49 miles northeast of Purdue and 72 miles south of Notre Dame) where he was Indiana’s Mr. Football at Pioneer High School in 2018. So he’s fielding plenty of ticket requests this week from family and schoolmates.

“My dad went to Purdue, my uncle went to Purdue, my brother went to Purdue, and I’ve had countless cousins go to Purdue” Kiser said. “My girlfriend goes to Purdue. And through Indiana football you make a lot of connections – I’m friends with Karlaftis and Bell. I had a lot of interest in Purdue, but when I stepped on (the) Notre Dame (campus), I knew this was the place for me.”