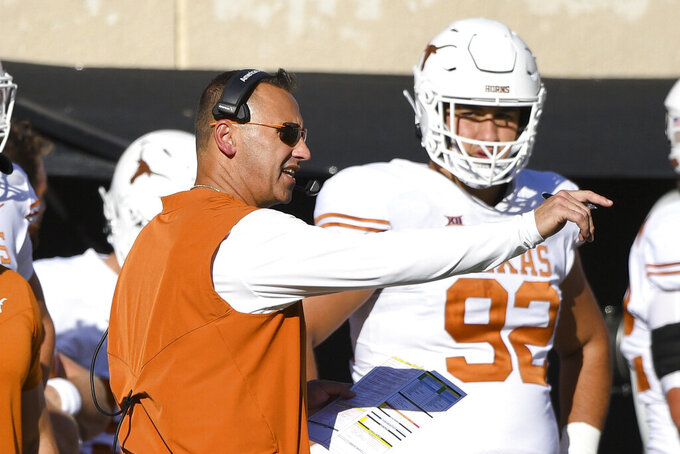 Line: Texas by 2 1/2, according to FanDuel Sportsbook.

Kansas State is a game behind TCU in the Big 12 standings while Texas is part of a logjam including Oklahoma State and Baylor another game back. That means both are in the mix for the conference championship game. The Wildcats can move closer to locking up their spot with a win, since they would have the tiebreaker over the Cowboys and Longhorns. Texas would be nearly eliminated with a loss.

Kansas State RB Deuce Vaughn against the Texas run defense, which is No. 3 in the conference and allowing 121.6 yards per game. Vaughn carried 22 times for 158 yards and a touchdown while catching four passes for 18 yards and another score in the Wildcats' 48-0 rout of then-No. 9 Oklahoma State last week.

Texas: RB Bijan Robinson ran for 145 yards and a touchdown in the 41-34 loss to Oklahoma State before their open date. Robinson leads the league with 920 yards rushing, just 18 ahead of Vaughn, and has reached the end zone 11 times. That touchdown total trails Baylor's Richard Reese by one for the Big 12 lead.

Kansas State: Whoever starts at QB. Adrian Martinez was entrenched as the starter before hurting his knee and playing just four snaps against TCU. Will Howard got the start last week and torched the Cowboys for 296 yards passing and fourth touchdowns without an interception.

Texas has won five straight in the series. ... The Longhorns had lost seven of their first eight games in Manhattan before winning the past two. ... Texas is among eight teams to rank in the top 20 nationally in scoring offense (18th) and scoring defense (19th). ... The Longhorns have scored at least 28 points in a half three times this season. ... Robinson ranks fifth nationally in total TDs with 13. He is seventh with 150.0 all-purpose yards. ... Texas WR Xavier Worthy is 11th nationally with seven TD receptions. ... Kansas State is coming off the largest-ever shutout by a lower-ranked team against a top-10 team in AP poll history. The 48-0 win over Oklahoma State tied for the fifth largest shutout of a top-10 team overall.