No. 14 Iowa faces No. 19 Michigan in possibly pivotal game 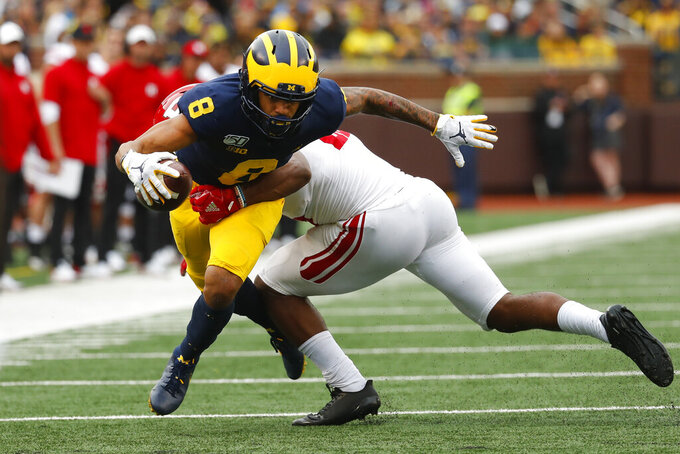 Iowa’s running game against Michigan’s defense: The Hawkeyes are averaging 5.2 yards per carry, rotating running backs Mekhi Sargent and Tyler Goodson. The Wolverines were pushed around two weeks ago at Wisconsin and allowed Jonathan Taylor to run for 203 yards and two touchdowns in a 35-14 win.

Iowa: WR Oliver Martin. The Michigan transfer faces his former team just months after leaving to play for his hometown team and getting a waiver to play immediately. Martin has five receptions for 28 yards and a touchdown this season. As a redshirt freshman last year with the Wolverines, he had 11 catches for 125 yards and a touchdown last year.

Michigan: WR Ronnie Bell. He has made the most of his opportunities, leading the team with 80-plus yards receiving in each of the last three games. Bell was overshadowed by receivers Donovan Peoples-Jones, Tarik Black and Nico Collins entering the season, but now he has team highs in reception (17) and yards receiving (263) while becoming a go-to target.

Iowa has won five of the last six matchups with Michigan over the last decade. ... The Wolverines have won two straight at home against ranked teams, beating Penn State and Wisconsin at the Big House last year. ... Iowa has dropped its last three games on road against ranked teams since routing No. 20 Northwestern on Oct. 17, 2015. ... Michigan DE Kwity Paye became the first defensive lineman in coach Jim Harbaugh’s five seasons to have 3 ½ tackles for losses in a game in last week’s 52-0 win over Rutgers. ... Iowa QB Nate Stanley has thrown eight TD passes without an INT this season. ... Iowa beat Michigan 24-21 at home in the last meeting three years ago.