No. 18 Oklahoma to TCU looking to bounce back from home loss 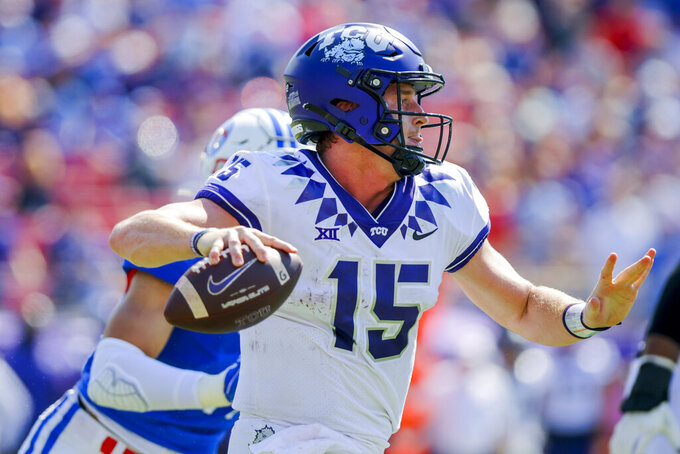 TCU quarterback Max Duggan (15) looks to pass during the first half of an NCAA college game against SMU on Saturday, Sept. 24, 2022, in Dallas, Texas. (AP Photo/Gareth Patterson)

Line: Oklahoma by 6 ½, according to FanDuel Sportsbook.

Oklahoma looks to bounce back from a home loss in its Big 12 opener, and TCU plays its first conference game for coach Sonny Dykes. The Sooners have posted back-to-back losses in the regular season only once since 1999. That was two years ago with another home loss to Kansas State — the team that just beat them for the third time in four years — was followed by a loss at Iowa State. Oklahoma has won 10 of 11 over the Horned Frogs since they joined the Big 12 in 2012. TCU wrapped up an undefeated non-conference schedule with a win at SMU, where Dykes coached the previous four seasons.

Sooners QB Dillon Gabriel and WR Marvin Mims vs. TCU defense. Gabriel has thrown for 272 yards per game and is tied for the Big 12 lead with 11 passing TDs. Mims has 18 catches for 397 yards and three TDs, and ranks third in the Big 12 with 99.3 yards per game. Only Oklahoma (two) has given up fewer TD passing than TCU's four. The Frogs have four of the league's top 10 players in passes defended.

Oklahoma: Linebackers Danny Stutsman (8.75 tackles per game) and David Ugwoegbu (8.5), and safety Billy Boone (8.25) rank second through fourth in the Big 12 for tackles.

TCU: Junior running back Kendre Miller ranks first nationally among active Power Five running backs averaging 7.21 yards rushing per carry. He is ahead of the 6.97 of Zach Evans, now at Ole Miss after transferring from TCU.

Max Duggan returned to being TCU's starting quarterback after Chandler Morris was hurt in the opener. Duggan leads the nation in passing efficiency and is third completing 77% of his passes (47 of 61). He has thrown for 695 yards with eight TDs and no interceptions. ... The Sooners have won 29 of their last 33 true road games. ... Dykes is the first TCU coach to win his first three games since Francis Schmidt in 1929. Dykes is the school's 12th full-time coach since Schmidt.