No. 2 Buckeyes to fine-tune vs Hoosiers before Michigan tilt 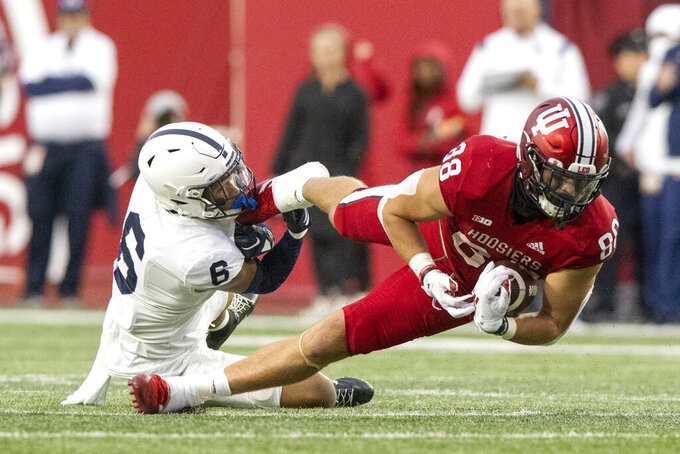 Indiana tight end AJ Barner (88) dives for a first down while being grabbed by Penn State safety Zakee Wheatley (6) during the second half of an NCAA college football game, Saturday, Nov. 5, 2022, in Bloomington, Ind. (AP Photo/Doug McSchooler)

The No. 2 Buckeyes were happy to get a 21-7 win in the inclement weather.

After that, it's a make-or-break Thanksgiving week showdown with No. 3 Michigan. The Buckeyes are trying to keep their heads in the present and look ahead at the same time.

The Buckeyes' usually prolific passing attack was grounded by wind gusts near 50 mph last week and they unexpectedly struggled to pull away from Northwestern, the worst team in the Big Ten.

Day believes it was a one-off, a perfect storm of conditions.

“Is everything perfect? No, it never is,” Day said. "It’s a journey. It’s a process. You’re constantly challenging guys to get better in certain areas. But you’re seeing a lot of great things out there.”

ABOUT THAT RUN GAME

Ohio State's top back TreVeyon Henderson missed his second full game of the year last week due to an unspecified injury, leaving Miyan Williams to carry the load. Williams had trouble finding space, especially in the first half when he gained only 22 yards in 11 carries. But he finished with a respectable 111 yards and two touchdowns.

When Jack Tuttle left last week’s game with an injured shoulder, it looked like Indiana coach Tom Allen would face a quarterback quandary. Tuttle was replacing injured starter Connor Bazelak, the 2019 SEC co-freshman of the year at Missouri, and Brendan Sorsby and Dexter Williams II were both ineffective in their debuts.

Allen announced earlier this week that Bazelak would be the starter, at least giving the Hoosiers' recently inefficient offense an experienced hand in Columbus.

“He was beat up pretty good,” Allen said, explaining why Bazelak sat out. “There are multiple things, and he just wasn’t able to, I believe, play at the level he needed to play at, to be what we needed him (him to be). That was the reason for him not being there.”

Another once-promising season is spiraling out of control for the Hoosiers. Since starting 3-0, they’ve lost six straight. Add that to the closing 10-game skid from last season after being ranked in the preseason poll, and Allen’s squad has lost 16 of 19.

If Indiana can’t snap a 26-game losing streak against Ohio State, the Hoosiers would also be ineligible for a bowl.

Allen said he's doing what he can to keep spirits high.

“You motivate them, you encourage them, you challenge them,” Allen said. “I think you appeal to the core of who you are and why you do what you do. The challenge I gave to our team was really around that focus of the core of your individual character and what makes you persevere when things are hard.”