No. 20 Florida guarding against giving LSU any more breaks 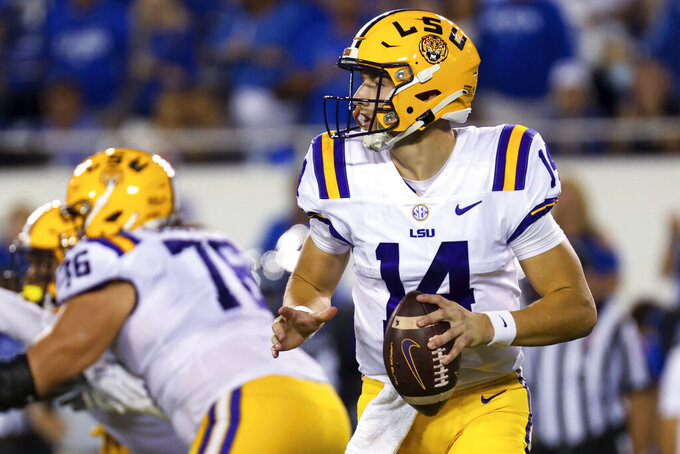 LSU quarterback Max Johnson (14) looks for a receiver during the second half of the team's NCAA college football game against Kentucky in Lexington, Ky., Saturday, Oct. 9, 2021. (AP Photo/Michael Clubb)

BATON ROUGE, La. (AP) — There’s only so much credit Florida quarterback Emory Jones and the Gators are willing to give the LSU Tigers for their upset victory in the Swamp one season ago.

After all, if not for a late, unsportsmanlike conduct penalty against Florida for a thrown shoe, LSU kicker Cade York might not have gotten a chance to make his game-winning, 57-yard field goal through the fog.

When No. 20 Florida (4-2, 2-2 Southeastern Conference) renews its historical rivalry with LSU (3-3, 1-2) this Saturday in Death Valley, Jones and Co. aim to play a cleaner game.

Jones stressed that the Gators aim to “make sure none of that will happen this week.”

“That’s our main focus, just trying to eliminate all the mistakes," Jones added. “And just make sure that we don’t beat ourselves.”

But if the Gators do start stumbling again, the reeling Tigers and embattled coach Ed Orgeron will take it.

LSU has lost two straight and has gone 8-8 overall since its undefeated national championship campaign in the 2019 season. A 42-21 loss at No. 11 Kentucky last weekend has forced Orgeron to field mounting questions about his job security — less than two years removed from one of the most dominant seasons in college football history.

Orgeron, a Louisiana native who grew up an LSU fan, readily acknowledges that the Tigers have failed to meet expectations and says he’s learned from years of coaching that the only way he can respond is to avoid news reports and narrow his focus.

“All we can do is go to work the next day, take it one day at a time and give it the best shot we can,” Orgeron said. “I understand that it’s pretty bad. I get that. But my job is to come to work with a positive attitude every day and do the best job I can on a daily basis.”

Jones and the Gators figure they’ll get LSU’s best shot, given the long history of riveting games between these programs. LSU has won eight of the past 11 meetings, including three of the past four and the past two.

“They always come to play when the Gators are in town,” Jones said.

As if losing top cornerback Derek Stingley Jr. indefinitely wasn’t a bad enough blow to LSU’s defense, the Tigers learned this week they also would be without No. 2 cornerback Eli Ricks, who is having season-ending surgery, and defensive end Ali Gaye, one of their best pass-rushers.

That’ll only make it tougher for LSU to contain Jones, a dual-threat QB who is accounting for about 270 yards of offense per game (190.7 yards passing and 79.7 yards rushing).

Florida’s last road trip was a debacle. The Gators committed 15 penalties for 115 yards in a 20-13 loss at Kentucky two weeks ago, including eight false starts. Coach Dan Mullen’s offense was out of sync most of the night, partly because Jones was using a hand clap to start plays. Linemen, receivers and backs struggled to hear the cadence over the sold-out crowd. Mullen insists he’s got it fixed but has been tight-lipped on the details.

“We’ve had a talk and we have a plan,” Mullen said.

Added Jones: “We’re probably going to stick with what we’ve been doing every game. … It’s just a point of just being focused and disciplined.”

The Gators expect preseason All-SEC cornerback Kaiir Elam to return after missing three games with a sprained right knee. That would be a welcome sight for the Gators, who already were without starter Jaydon Hill (knee) for the season and dismissed graduate transfer Elijah Blades for unknown reasons following last week’s game. Freshmen Jason Marshall and Avery Helm have filled in for Elam and Hill.

While LSU’s 83.3 yards per game rushing ranks 127th in the nation, the Tigers are coming off their best game of the season running the ball. In their loss at Kentucky, junior running back Tyrion Davis-Price rushed for 147 yards and two touchdowns.

The development provided hope that LSU’s offense could have more balance and take pressure off of sophomore QB Max Johnson, who has attempted 219 passes in six games, completing 135 for 1,730 yards and 17 touchdowns against four interceptions.

“I remember both those guys from our game last year. It’s going to be a challenge for us,” LSU center Liam Shanahan said. “We have to put it together this week.”